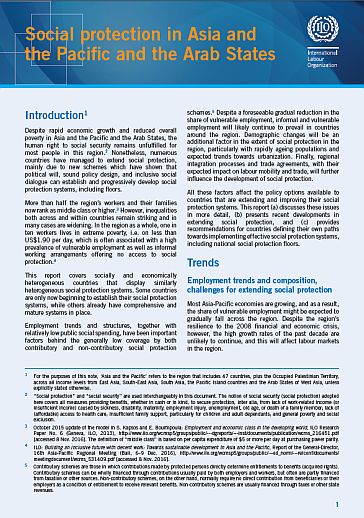 Download:
Despite rapid economic growth and reduced overall poverty in Asia and the Pacific and the Arab States, the human right to social security remains unfulfilled for most people in this region. Nonetheless, numerous countries have managed to extend social protection, mainly due to new schemes which have shown that political will, sound policy design, and inclusive social dialogue can establish and progressively develop social protection systems, including floors.

More than half the region’s workers and their families now rank as middle class or higher. However, inequalities both across and within countries remain striking and in many cases are widening. In the region as a whole, one in ten workers lives in extreme poverty, i.e. on less than US$1.90 per day, which is often associated with a high prevalence of vulnerable employment as well as informal working arrangements offering no access to social protection.

Employment trends and structures, together with relatively low public social spending, have been important factors behind the generally low coverage by both contributory and non-contributory social protection schemes. Despite a foreseeable gradual reduction in the share of vulnerable employment, informal and vulnerable employment will likely continue to prevail in countries around the region. Demographic changes will be an additional factor in the extent of social protection in the region, particularly with rapidly ageing populations and expected trends towards urbanization. Finally, regional integration processes and trade agreements, with their expected impact on labour mobility and trade, will further influence the development of social protection.