Jakarta (ILO news): The ASEAN Safe Migration Campaign was launched at the ASEAN Secretariat in Jakarta on 12 December to promote safe migration for everyone.

The launching ceremony of the ASEAN Safe Migration Campaign was attended by 150 participants, bringing together government officials from ASEAN Member States, representatives of ASEAN sectorial bodies, ambassadors from the ASEAN dialogue partners, and the larger diplomatic community. Importantly, the event was also attended by migrant workers, employers, civil society groups and intergovernmental organizations, as well as the media.

The launch was hosted by the Ministry of Manpower of Indonesia with support from the ASEAN Secretariat, the International Labour Organization (ILO) through its TRIANGLE in ASEAN programme, and the Enhanced EU-ASEAN Dialogue Instrument (E-READI).

Panudda Boonpala, ILO Deputy Regional Director for Asia and the Pacific, remarked “Labour migration has long been a significant factor behind the economic and social advancement of the ASEAN region and its people. Today, ahead of International Migrants Day and one year following the adoption of the ASEAN Consensus, we come together to share information, spread awareness, and make ASEAN a region of safe migration.”
A campaign video, developed by ILO TRIANGLE in ASEAN, was unveiled during the launch highlighting the benefits that labour migration brings to the ASEAN region, the need to make safe migration routes accessible to all migrant workers, and the commitment made by ASEAN leaders to realizing this goal when they signed the ASEAN Consensus on the Protection and Promotion of the Rights of Migrant Workers in November 2017. It also underlines that governments and workers, employers, and civil society in sending and receiving countries all have a role to play in making safe and regular migration accessible to all workers in the ASEAN region.

ILO TRIANGLE in ASEAN provided technical assistance to ASEAN Committee on the Implementation of the ASEAN Declaration on the Protection and Promotion of the Rights of Migrant Workers (ACMW), the Government of Indonesia as the lead country, and the ASEAN Secretariat in designing and developing the concept and key messages for the ASEAN Safe Migration Campaign. TRIANGLE in ASEAN is funded by the Governments of Australia and Canada.

According to recent UN estimates, 6.9 million ASEAN nationals have migrated from their home countries to work in another ASEAN country. This number has risen dramatically, increasing more than fivefold since 1990. The total stock of migrants from ASEAN countries equals more than 20 million people (20.2 million people). A little under half of those (48%) are women. The total stock of international migrants in ASEAN has tripled from 1990 to 2015 – from 3.2 million to 9.7 million. This trend is likely to continue as the ASEAN integration continues to deepen.

Commitments for a safe migration path have been agreed upon by ASEAN leaders when they signed the Cebu Declaration in 2007 and the ASEAN Consensus on the Protection and Promotion of the Rights of Migrant Workers in 2017. These ASEAN instruments include non-binding commitments for sending and receiving states, in accordance with the national laws, regulations and policies of the ASEAN Member State.

TRIANGLE in ASEAN supports the ASEAN Secretariat and related bodies to enhance the contribution of labour migration to stable and inclusive growth and development. 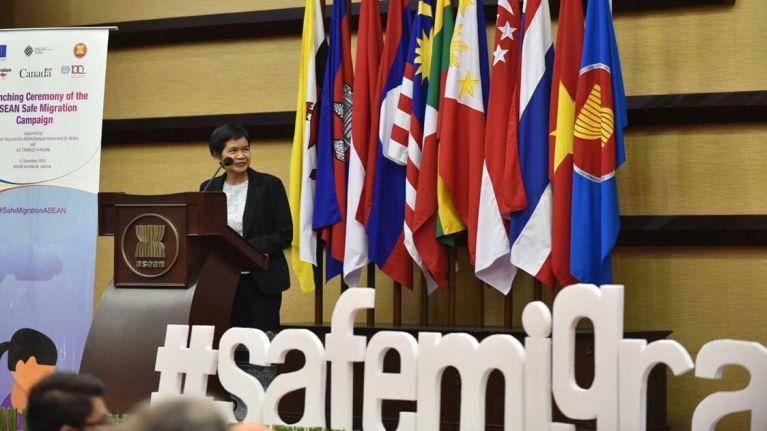