BANGKOK (ILO news) - Overworked and undervalued, women migrant workers in the Thai construction and domestic work sectors are regularly discriminated against and often lack labour protection. Women currently make up approximately half of all documented migrant workers in ASEAN, but their experiences are often shaped by their gender and are markedly different to the experiences of men.

The studies explore two different areas of work. Domestic work is an informal and largely female-dominated sector, whereas construction is largely male-dominated and a significant part of the formal economy. Yet, the experience of women migrants working in these different fields are linked by a number of factors.

Firstly, the work performed by women in both construction and domestic work is undervalued, as demonstrated by the low wages they receive. Of the migrant domestic workers surveyed, 90 per cent were paid less than minimum wage. Although Thailand has ratified the ILO’s Equal Remuneration Convention, 1951 (No. 100), women construction workers report being paid less than men even for doing the same work. Only around one in three of the migrant women interviewed received the minimum wage, whereas all of the men interviewed did.

In addition to being economically undervalued, women migrant workers’ contributions are also socially undervalued. Domestic work is often not treated as work, instead it is seen as an innately female role that women perform as “helpers” or as “part of the family”, excluding them from labour rights and social protection. Both employers and government officials interviewed emphasized the family model as culturally appropriate for Thailand. In the construction sector, employers indicated that they regarded women workers as of secondary value, employed as part of a ‘package’ that primarily aims to recruit the husband, despite the fact that many women construction workers perform the same tasks as men.

Secondly, women migrant workers in construction and domestic work are overworked and insufficiently protected. Migrant domestic workers reported excessive working hours, with those who perform care roles working on average 13.5 hours each day. Nearly one quarter of the domestic workers interviewed reported having no days off, despite Thai law mandating at least one day off per week. In the construction sector many migrant women performed physically demanding work, and expressed a fear of injury on site. Few employers provided safety equipment or had adequate tools for all workers.

Limited coverage and implementation of labour laws and social security provisions also leave women migrants in construction and domestic work unprotected. Domestic workers are excluded from maternity benefits and protection from dismissal based on pregnancy. Though construction workers are covered by these laws, employers in the sector were found to have regularly dismissed pregnant women. None of the women interviewed received maternity leave or pay.

Worker, helper, auntie, maid? emphasises the need to change public attitudes towards migrant domestic workers. Most importantly, domestic work needs to be recognised as work and given the same labour protection and social security benefits as other sectors. 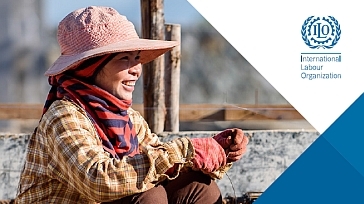