(Jakarta, Indonesia) The girls – and one boy – cheerfully engaged some ASEAN labour officials in a hot and bustling Jakarta suburb, with their songs, dances, messages, and laughter. Like healthy teenagers around the world, they could sing and dance to music from Justin Bieber and Bollywood, text with their friends and family, chatter about trends, their hopes and aspirations. These were clearly the lucky ones. They had a childhood, finally. They had a place to come to in their free time, interact with their peers, and unleash their creative energies.

The place was a learning centre for child domestic workers operated by a local Indonesian NGO Mitra Imadei, with the full support of local municipal authorities and neighbours. It took years to convince authorities and employers that child labour in domestic work is not acceptable and that these children needed care, protection and an opportunity to learn, so that they could enjoy the fruits of “decent work” as adults. The bright, healthy and confident faces at the learning centre were a testament to the fact that the approach has paid off.


However, millions of children face profound, hidden exploitation in domestic work. These children endure long, irregular hours of work and arduous work conditions, are deprived of schooling, and are vulnerable to abuse and exploitation. Sleeping on the kitchen floor, enduring beatings and verbal abuse, sub-standard food, no wages, and not being allowed to visit their families are all-too- familiar stories. The gruelling work and conditions endured in their younger years also limits their path to and aspirations for decent work when they are older.

Deeply entrenched attitudes and cultural values pose significant obstacles. Domestic workers are commonly not considered employees, and consequently many employers do not recognize the existence of obligations that typically arise from an employment relationship.

This year, the World Day against Child Labour on 12 June will focus attention on the theme of “NO to Child Labour in Domestic Work.” The choice is timely, given the recent adoption of ILO Convention 189 on Decent Work for Domestic Workers that recognizes domestic work as work for those of legal working age, with special protections for those under 18. Worldwide, there are millions of child domestic labourers, mostly girls. Many of these children are below minimum age for employment while those that are above minimum age find themselves largely unprotected by laws geared towards formal sector employmnet. It is time to take action to protect these vulnerable child domestic labourers.

Establishing its main learning and action hub in Indonesia and cross-fertilized by a regional exchange of knowledge, PROMOTE focuses on expanding legal protection for child and adult domestic workers. Through targeted capacity building it also aims to broaden the ability of national and regional domestic workers’ organizations to tackle child domestic work and other decent work deficits in the domestic work sector. The project promotes national and regional knowledge sharing, raises awareness using non-traditional media and innovative partnerships, and ensures transparency and accountability as well as the recording and analysis of outcomes. The aim is to create a lasting, concrete change in both discussions and actions towards the abolition of child domestic labour and decent work for domestic workers, in a sector of work that is dominated by women.

On World Day against Child Labour 2013 let us all play a part. Please join the ILO in encouraging governments to reform their laws and policies to ensure the elimination of child labour in domestic work and decent, protected working conditions for young domestic workers who have reached the legal working age. Please support the campaign to encourage ILO member States to ratify and implement ILO Convention No. 189 on decent work for domestic workers, along with the ILO’s child labour conventions. We must build up the capacity of domestic workers’ organisations to tackle underage working, as part of a worldwide movement against child labour. 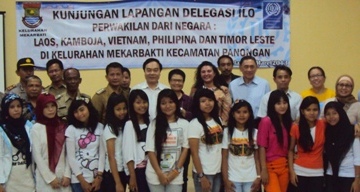 From classroom to college – A champion for child workers

No to child labour in domestic work - World Day Against Child Labour, 12 June 2013
Skip to top