The International Labour Organization (ILO) organised a “Conference on Prevention of Violence and Harassment against Women at Work” with participation of social partners on 6 December 2018 in Ankara under the project “More and Better Jobs for Women” funded by the Swedish International Development Cooperation Agency (SIDA).

Premised on the facts that violence and harassment against women at work were barriers to achieving gender equality at work, to women’s participation and advancement in the world of work as well as causes of productivity drops, loss of reputation and thus higher costs for firms and employers, the Conference addressed the possible roles and contributions the social parties in eliminating violence against women at work, experience on the matter and how to strengthen the cooperation among partners.

“The link between gender and violence must be exposed”
Delivering the opening remarks at the Conference, Mr. Numan Özcan, Director of the ILO Office for Turkey, said: “I emphasise that violence and harassment against women at work is a violation of human rights.” 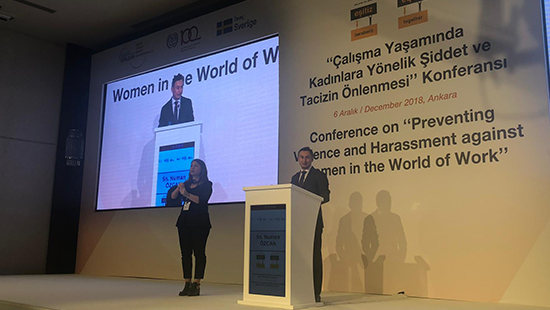 Pointing out that violence at work should be defined to cover all acts that harm the person physically, psychologically, sexually or economically, Özcan said: “The link between gender and violence must be exposed.”

Underlining that gender pay gap should be viewed as economic violence, Özcan noted that a key step towards eliminating eliminate all forms of violence would be to develop necessary measures through social dialogue to eliminate gender inequalities.

ILO to issue a Convention or Recommendation in June 2019 on combating violence at work
At the International Labour Conference of June 2018, ILO discussed the issue of eliminating of gender-based violence at work and developing a labour standard on the matter. The International Labour Conference in June 2019 is expected to pass a convention or a recommendation or both.

Özcan said: “The said draft Convention is a highly significant opportunity to forge an international consensus on the scope of violence at work, and adopt a framework that defines the duties and responsibilities of governments, workers’ and employers’ organisations to prevent violence in the world of work.”

ILO and SIDA cooperation to continue stronger
Speaking at the Conference, Excellency Annika Molin Hellgren, Swedish Ambassador to Ankara, said: “Gender equality is not only a matter of rights. Our experience of more than 50 years in Sweden has shown that there is a close relation with the larger participation of women in the labour market with the advancement towards gender equality and sustainable economic and social development.” 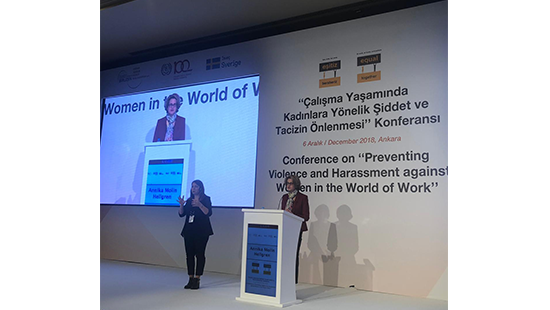 Excellency Hellgren stated that “Sweden is very pleased to engage with the Turkish Government and a number of concerned government agencies, the UN and ILO going forward in the context of the project ‘More and Better jobs for Women’,” and further elaborated that “I am therefore glad to announce that this project will now be followed by a second phase in a renewed collaboration with ILO and the Turkish Employment Agency as well as with a more diversified and enriched stakeholder group including the Ministry of Family, Labour and Social Services, workers’ and employers’ organisations and various prominent enterprises.”.

Delivering her opening remarks at the Conference, Ms. Ayşe Kardaş Ergezen, Deputy Minister of Family, Labour and Social Services, noted that psychological harassment at work was a basic workplace problem which might occur to anyone regardless of culture, age, sector, sex or status, and women experienced more psychological harassment, and said: “To combat such type of violence, the concept should first be known and correctly understood by everybody in the world of work.” 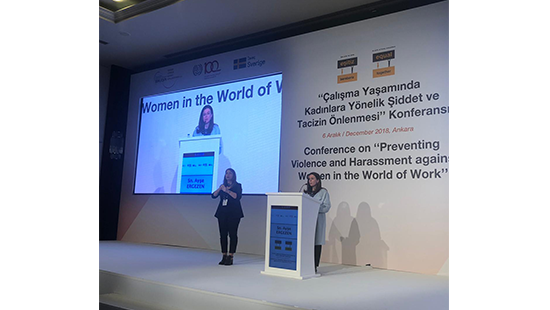 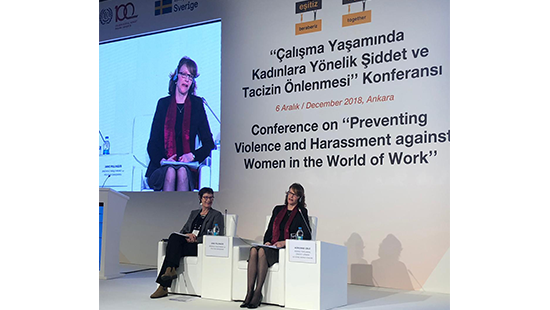 The Conference also featured a panel, moderated by Prof. Dr. Ms. Kadriye Bakırcı on “ILO’s actions and discussions on setting a labour standard on preventing violence and harassment at work”, and another panel moderated by journalist Ms. Tuluhan Tekelioğlu on “Roles and contributions of social partners in eliminating violence against women at work.” 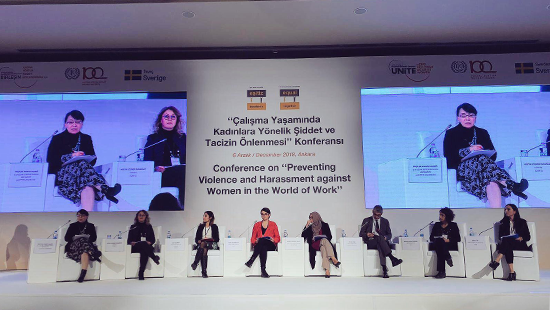 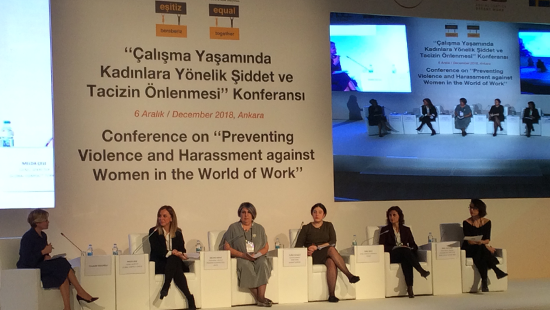 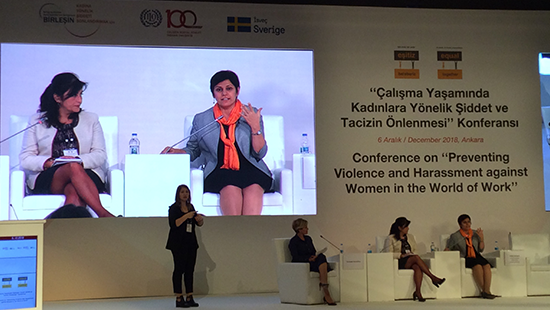 Conference as a part of UN’s 16-day global campaign to end violence
The Conference was organised in the context of 16-day “UNiTE” campaign to “End Gender-Based Violence” supported by the United Nations all over the world starting on 25 November, the International Day for the Elimination of Violence against Women, ending on 10 December, Human Rights Day. 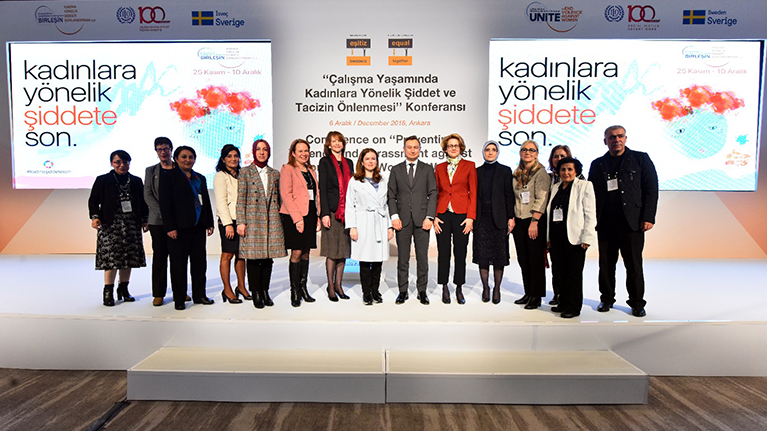