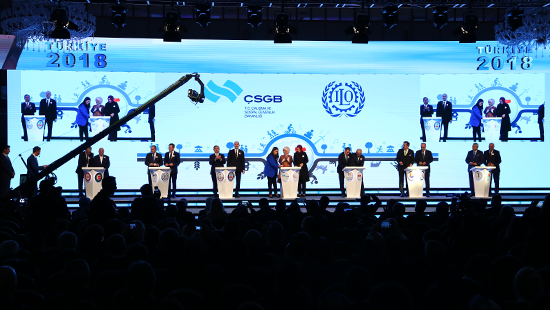 Turkey announced 2018 the Year Against Child Labor, under the auspices of Turkish first lady Emine Erdoğan. The announcement came at the signing ceremony of the declaration of combating child labor, organized by the ILO and Turkey’s Ministry of Labour and Social Security. All related state organizations of Turkey pledged commitment on the issue and in scope with that, 6 ministries and 7 social partners penned the declaration along with the ILO.

Turkish first lady said child labour is a shame for the whole society. Erdoğan said children should be at school instead of the workplaces and should get educated instead of being on the streets, adding that children are the gifts of God and should not be considered as labour forces.

Speaking at the ceremony, Turkey’s Labour and Social Security Minister Jülide Sarıeroğlu said significant steps are being taken and with the close cooperation of the related agencies the issue would fall from Turkey’s agenda. Highlighting the contributions of the ILO on combatting child labour, Sarıeroğlu reminded that Turkey was one of the first six countries to participate to the “International Programme for the Elimination of Child Labour (IPEC)” in 1992, and chosen as the model country in 2006 at the ILO Labour Conference. 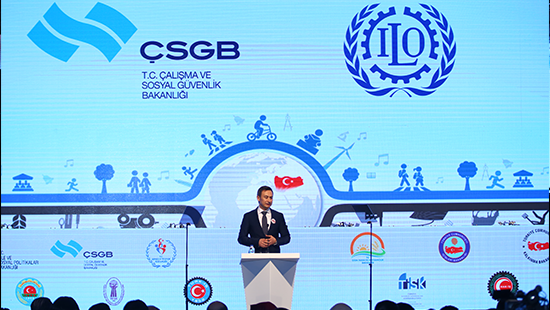 The Director of the ILO Turkey office Numan Özcan emphasized the pioneering role of Turkey on combating child labour. Özcan said: “With the National Program, Turkey first constituted a multi-partnered plan which defined the intervention priorities that were mentioned in the ILO conventions No.138 and No.182. Then, by declaring 2018 the Year Against Child Labour, Turkey proved its determination and took a step that would set an example for the rest of the world. As far as I know, after the adoption of the Sustainable Development Goals, only Turkey constituted a comprehensive program and declared a year on the issue.”


Turkey proved its determination and took a step that would set an example for the rest of the world. As far as I know, after the adoption of the Sustainable Development Goals, only Turkey constituted a comprehensive program and declared a year on the issue..”

Özcan expressed the support of all UN agencies as well. 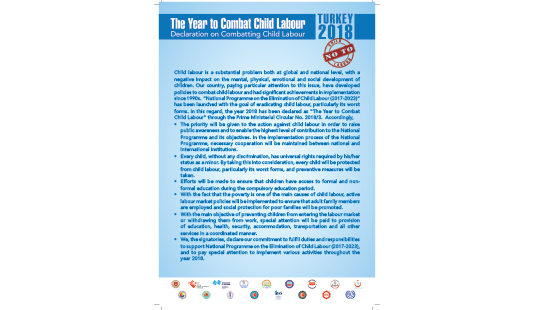 Child labour is a substantial problem both at global and national level, with a negative impact on the mental, physical, emotional and social development of children. Turkey, paying particular attention to this issue, have developed policies to combat child labour and had significant achievements in implementation since the 1990s. “National Programme on the Elimination of Child Labour (2017-2023)” has been launched with the goal of eradicating child labor, particularly its worst forms. In this regard, the year 2018 has been declared as “The Year to Combat Child Labour” through the Prime Ministerial Circular No. 2018/3. Accordingly;

“The priority will be given to the action against child labour in order to raise public awareness and to enable the highest level of contribution to the National Programme and its objectives. In the implementation process of the National Programme, necessary cooperation will be maintained between national and international institutions. Every child, without any discrimination, has universal rights required by his/her status as a minor. By taking this into consideration, every child will be protected from child labor, particularly its worst forms, and preventive measures will be taken. Efforts will be made to ensure that children have access to formal and non-formal education during the compulsory education period. With the fact that the poverty is one of the main causes of child labor, active labour market policies will be implemented to ensure that adult family members are employed and social protection for poor families will be promoted. With the main objective of preventing children from entering the labour market or withdrawing them from work, special attention will be paid to provision of education, health, security, accommodation, transportation and all other services in a coordinated manner. We, the signatories, declare our commitment to fulfill duties and responsibilities to support National Programme on the Elimination of Child Labour (2017-2023), and to pay special attention to implement various activities throughout the year 2018.”

ILO Turkey Office provides technical support to the “National Programme on the Elimination of Child Labour (2017-2023)”, which is being coordinated and undertaken by the Ministry of Labour and Social Security, with its 26 year-old experience in the field.

National Program has an important role on carrying out the priorities that were mentioned in the ILO conventions No.138 and No.182.

ILO considers Turkey’s declaration of 2018 as the Year Against Child Labour and the support all the related agencies provide a milestone for its dedicated hard work in the field.