The Permanent Representation of the Kingdom of the Netherlands to the EU in Brussels hosted the panel discussion; Lessons from Turkey: How Public Private Partnership created a sustainable model to tackle child labour in the hazelnut sector on October 13, 2016 in Brussels in collaboration with the ILO Office for Turkey, The Association of Chocolate, Biscuits and Confectionery Industries of Europe (CAOBISCO), and the Netherlands Embassy in Ankara.

Amongst the participants were a broad range of representatives and stakeholders from the private sector, The European Commission, the rotating Presidency of the EU, national governments as well as non-governmental and International Organisations. Notably, also the Turkish Ministry of Labour and Social Security, as well as the Turkish Trade Union Confederation were present to attend this event.

In her opening statement, Netherlands Ambassador to the EU Political and Security Committee (PSC) Ms. Carola van Rijnsoever, welcomed the participants and said: “The Netherlands strongly support the fight against child labour. We are firmly committed to the ambitious target, set by the Sustainable Development Goals, to eliminate all forms of child labour by 2025. […] The Netherlands has been supporting this unique multi-stakeholder undertaking in Turkey since 2012, and our continued cooperation is vital.”

Ms. Nurcan Önder, Director General of Labour of Turkish Ministry of Labour and Social Security said in her opening statement: “Our Ministry aims at eliminating worst forms of child labour in industry, street work and seasonal agriculture by 2023 within the framework of National Employment Strategy. We would like to express our gratitude to the ILO Office for Turkey for this successful project we jointly implement to contribute this objective.” 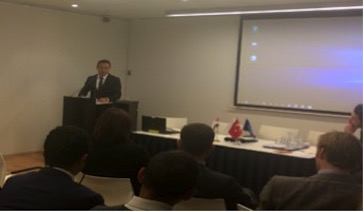 The model used in this project went beyond the traditional approach and created a network of a number of public private partnerships at various levels and connected them with each other like a spiders' web.”

Numan Özcan, Director of the ILO Office in Turkey

Mr. Numan Özcan, Director, ILO Office for Turkey stated: “This public private partnership which is the first ever of its kind in Turkey undertakes concrete steps to mainstream child labour concerns into larger social policies and programmes, improve policy and legal analysis, and establish child labour monitoring mechanisms. The continuous collaborative work between government, social partners, private sector, civil society organizations and other stakeholders contributes to sustainable strategy not only in hazelnut harvesting but also overall seasonal agriculture in a broader perspective.

Mr. Alessandro Cagli, President of CAOBISCO mentioned in his opening statement: “Why is this project successful? Many reasons, but particularly: it is a project based on a Public Private Partnership, which means leveraging the highest competences of each partner in the project: local governments, NGOs specialised in education/agriculture practices, private sector. It is only by effectively working together, in a coordinated and active way, that we can bring true progress and achieve concrete results in this field”.

The opening statements and presentation of the practical project results were followed by the panel discussion moderated by ILO Brussels Director, Ms. Claire Courteille. The panellists representing the Government of Turkey, Trade Unions, Private Sector, the Netherlands Embassy to Turkey and the ILO discussed practical implementation of the Public Private Partnership model which was developed through the project*, as well as the recent achievements, obstacles and challenges, and the road ahead. 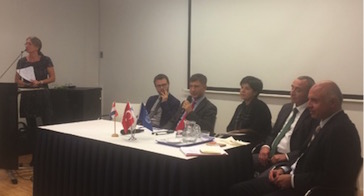 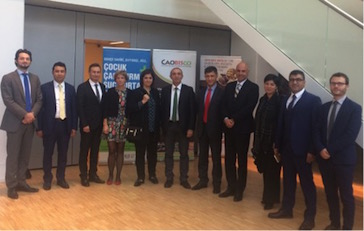 So far, the project provided counselling to nearly 3,200 seasonal worker families. Over 3,100 children (aged 4-16 years old) have been reached, the majority of whom were withdrawn or prevented from work mostly through providing an alternative in the form of education. In addition, several rural intermediaries and hazelnut garden or plantation owners have received counselling and training. The project has raised awareness of the issue of child labour, and encouraged national and local ownership, including by transferring knowledge and skills to the relevant institutions.

The establishment of monitoring systems at the local levels has been key to properly implement the project. The project created a sustainable model to tackle child labour in the hazelnut sector in Turkey, and as such contributes in the fight against child labour in seasonal agriculture throughout Turkey.


*In 2012, the ILO and the Turkish Ministry of Labour and Social Security jointly initiated a project focusing on the elimination of the worst forms of child labour in seasonal hazelnut harvesting, co-funded by the Association of Chocolate, Biscuit and Confectionery Industries of Europe (CAOBISCO) and the government of the Netherlands. The action originated in the province of Ordu in the East Black Sea Region of Turkey, and following a successful first phase, the intervention was extended to several other provinces in Turkey in 2015.