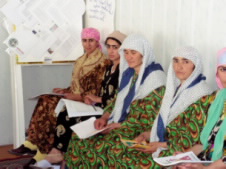 An analysis of national legislation covering HIV and AIDS and the world of work was conducted by the International Labour Organization (ILO) in 2007-2008.

The study had two main aims:

Two legal experts were contracted by the ILO to carry out the analysis with the support of the Ministry of Labour and Social Development of Tajikistan. Information on the legal framework relevant to HIV and the world of work was collected, including draft legislation, case law and policies. The experts examined the Constitution, the Labour Code and legislation covering other fields, such as health, education, immigration laws and policies having an impact on the movement of workers, including those living with HIV. They also took into account policy statements issued by the government, employers’ or workers’ organizations and policies or guidelines issued by specific sectors or enterprises.

The final report identified a number of actions needing to be taken to better harmonize national legislation and policies with international standards and guidelines. The experts recommended including HIV status (real or perceived) as a prohibited discrimination ground in the Labour Code and introducing penalties for unlawful disclosure of HIV related information. They also called for further facilitation of medical and psychosocial assistance at the workplace to persons living with HIV.