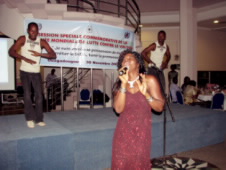 A KAP survey conducted by the ILO in 2006 showed that 14.6% of 407 workers surveyed believed that HIV-positive workers would be denied professional opportunities and advantages in the workplace.

In partnership with the US Department of Labour, the project started to work with 16 workplaces including a group of workers from the informal economy. With PEPFAR support in 2008, the project scaled up, reaching an additional 11 workplaces. The project collaborates with the well-known singer Pyanne Djiré, who has disclosed her HIV-positive status, to address the issues of stigma and discrimination with managers and workers. In parallel, the project works with the Ministry of Labour and employers’ and workers’ organizations to build their capacity in addressing HIV issues and to strengthen the national legal and policy framework.

The Ministry of Labour as well as employers’ and workers’ organizations signed a Tripartite Declaration on HIV and AIDS and the World of Work in 2006.

Each workplace partnering with the project has established a joint labour and management HIV committee. A total of 14 workplaces have already adopted an HIV policy which includes a clause on non-discrimination and 13 are in the process of doing so. A follow-up survey was conducted in April 2009 to assess the impact of the workplace interventions on workers.

The ILO project facilitated the creation of a National Coalition and ensured the participation of trade unions and PLHIV, who provide particular insights on issues related to stigma and discrimination.

Strengthening the national policy framework with regard to discrimination in employment provided a clear signal to workers and managers. The Tripartite Declaration has been a powerful advocacy tool to support the development of HIV and AIDS workplace policies, the implementation of workplace programmes and the recruitment of new partner enterprises. With the support of the ILO and UNAIDS, the national stakeholders are currently developing a national policy to operationalize the Declaration. In the course of 2009, a permanent National Tripartite Commission on HIV and AIDS and the World of Work was established to take over the tripartite Project Advisory Board.