For many Zambian children, June 12 does not only provides an opportunity to reflect on various forms of child labour affecting them, but also ignites aspirations for the future.
This aptly summarise the speech delivered by12-year-old Jennipher Musonda during this year’s World Day Against Child Labour (WDACL) dubbed, ‘Children should not work in the fields, but on dreams’ which was held at Lusaka’s Olympic Youth Development Centre (OYDC).
The event, which was graced by acting Minister of Labour and Social Security, Richard Musukwa, was characterised by song and dance from multitudes of young people, who braved the chilly weather to be part of the commemorations.
In her vote of thanks, Jennipher, the grade six pupil at Lusaka’s SOS Children’s Village, called on the Government and stakeholders to help curb child labour in the country.

“Decision makers especially those in government need to seriously look at the best interest of children regardless of their background, race or religion. Our parents too, need to be reminded that children should not work in fields, but on dreams,” she stated.

Jennipher bemoaned the high prevalence of child labour in the country, stating that there were a number of children involved in various forms of child labour.

“We as children have noticed with sadness that our parents, uncles and aunties are giving us a lot of work and it is becoming normal to see children working on farms and doing hard work, working as maids cleaning and washing clothes, milking cows and worse off young girls being married off to older men,” she observed.

Jennipher attributed the high prevalence of child labour to unfavourable cultural practices that prevent children from pursuing their careers.
“Why shouldn’t children work in fields, but on dreams? A child dreaming of becoming a medical doctor, engineer, teacher or pilot should have enough teachers to teach them. Children need play parks than beers halls and taverns,” she narrated.
And ILO Country Office Director Mr George Okutho urged all actors and organisations to join hands and add their voice to accelerate worldwide movement against child labour, and Zambia in particular.
“In Zambia, an estimated 34.4% of all children aged 7-14 (around 950,000 children) and about 27% of children under the age of 13 were economically active in 2008. Child labour in Zambia is predominantly in the agriculture sector accounting for around 92% of the economically active 7- 14 year olds work,” said Mr Okutho in a speech read on his behalf by Officer-In-Charge Ms. Wangui Irimu.
Meanwhile, Mr. Musukwa called on trade unions and employers to help the government to alleviate child labour.
“Government through the labour inspectorate unit is determined to ensure that labour standards are upheld. Further, the district child labour committees and the community child labour committees are also complementing the efforts of the inspectors in curbing child labour,” said Mr Musukwa. 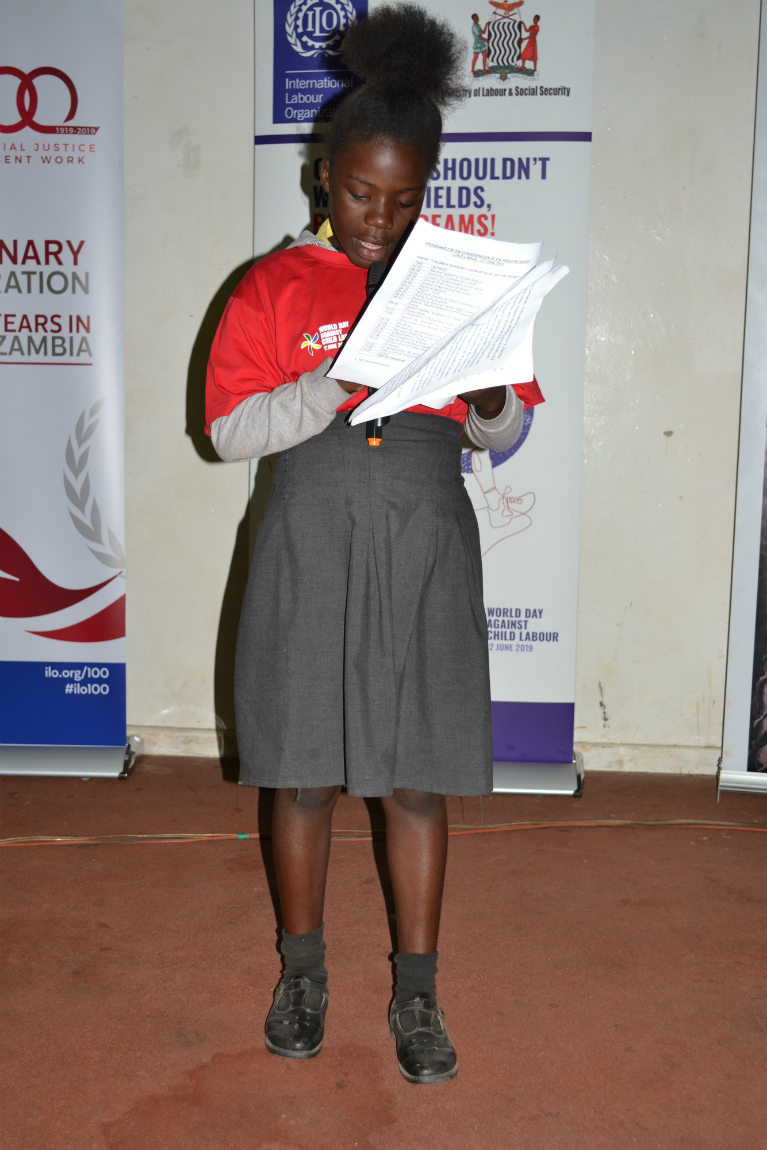