Cairo (ILO News)- On October 17, 2016, the ILO Cairo Office organized the “Public Employment Service (PES) Strategy Workshop” which aimed to present the experiences of the ILO and the Ministry of Manpower in strengthening the PES offices, as well as the Ministry’s newly developed PES strategy to provide better employment services.

Taking part in the workshop were more than 30 representatives from the Ministry of Manpower, as well as directors of the PES offices and PES counsellors in the selected offices in a number of governorates.

The primary role of the PES offices are to match job seekers into available employment, and provide advice on employability, skills enhancement and the labour market. The PES offices therefore play an important role in addressing Egypt’s challenges in unemployment and disguised unemployment by providing linkages between potential employees with job opportunities.

For several years, the ILO’s “Decent Jobs for Egypt’s Young People Project” funded by Global Affairs Canada and the “Transition to Employment: Career Guidance for Youth and Job Creation” project funded by the Italian Dept Swap Programme have been working in collaboration with the Ministry of Manpower to upgrade PES services and build the capacity of staff in order to enhance employment facilitation and ease the transition into work for young people.
This is being achieved by providing modern equipment and furnishings in the offices and delivering trainings to PES staff to equip them to effectively operate the offices and provide career guidance and job counselling. To date, the ILO projects have upgraded 21 PES offices across 16 governorates in Egypt.

The ILO is additionally working with PES to expand their service provision by strengthening networks at the local level with employers and other service providers, and carrying out employment fairs. The two projects have organized a series of 13 employment fairs with the PES offices that have led to the successful employment of over 16,000 youth.

During the workshop, Mr. Mohamed Abdel Rahman, Head of the Internal Employment Department at MoM presented the Ministry of Manpower’s strategy for the PES offices, which was developed in light of Egypt’s vision 2030. The strategy included plans to electronically connect PES office and create three sectoral specialized employment agencies as follows: industrial in Port Said, agricultural in Minya and touristic in Red Sea similar to the Moroccan model of employment agencies.

ILO's interventions in upgrading the PES offices across Egypt

The workshop also served as a platform to share and discuss the findings of the ILO opinion poll undertaken by GISR Institution for Survey Research on the ILO interventions in upgrading the PES offices across Egypt, and ways forward.The opinion poll findings were largely positive indicating that both jobseekers and employers found the enhanced PES services highly beneficial; however, some areas were highlighted for improvement.

The participants were also divided into five working groups discussing the following crucial topics: basic functions of PES, communicating with youth and employers, employment agencies (regional/ sectoral), networking the PES offices electronically/ databases and employees capacity building. The main results of the group work focused on preferring the sectoral to regional agencies as the latter do not necessarily represent the sectors with available job opportunities, as stated Mr.-Mohamed Abdel Rahman. “Moreover, the sectoral agencies link the graduates of the same discipline across the country with the work places, “he added.

Mr. Ashraf Riad, the rapporteur of one of the working groups, emphasized that: “The Ministry currently works on networking the PES offices through an electronic platform and providing electronic databases for all offices, leading to fast provision of the required data, promotion of their accuracy; provision of time and effort to capture and extract data”.

The recommendations of the other working groups included separating employment services from other labour office duties; making further investments in PES staff capacity building; and increasing PES awareness amongst youth.

To assess the efforts of the ILO in enhancing the PES offices across Egypt, an opinion poll was commissioned and carried out in 2015 by GISR Institution for Survey Research. The opinion poll aimed to measure the satisfaction amongst employers, youth, and enterprises of the quality of services provided by PES offices. The main findings indicated that: 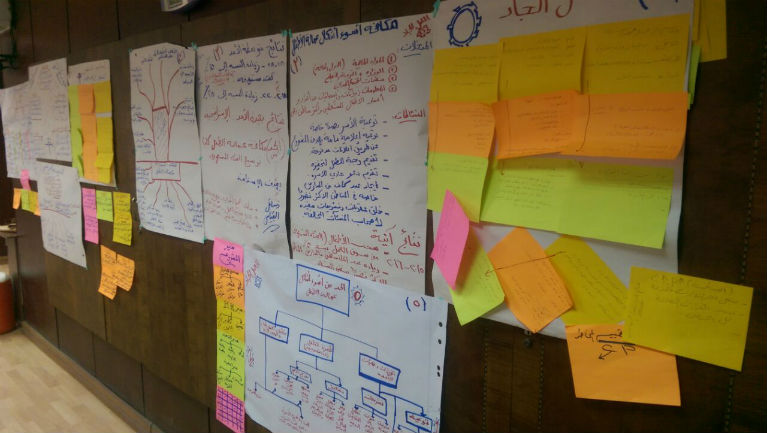