(ILO News) Nyanga: Nyarumvurwi village is nestled at the base of some rolling mountains in Ward 23 of Nyanga district, Zimbabwe. The community of this village has embraced the women economic empowerment programme targeting some 60 vulnerable women who have undergone transformation through capacity development training and mentoring. Prior to the project, the women were practicing subsistence farmers.

However, with the advent of the project, a multi-pronged strategy based on the ILO’s Training for Rural Economic Empowerment (TREE) tool was rolled out. This saw gender transformation training targeting the women’s spouses and traditional leaders to open up to the reality of women being economically empowered and to provide the needed support in the process. The women themselves were equipped to balance their reproductive roles and the newly acquired productive role through the project. In Zimbabwe, one of the key causes of gender-based violence is economic dependency of women on men . Often, Gender-based violence is increased when there is absence of a conducive environment to initiate women into economic empowerment programmes.

The women received skills transfer training on farming through the government’s Agritex officers, and business development training which facilitated for them to farm as a business. In addition, the group received inputs for their initial cycles in the form of seeds, fertilizers, and chemicals. A common piece of land was awarded to the women by the traditional leaders.


Following the above investment, the women of Nyarumvurwi have succeeded in growing several cycles of horticulture crops including beans, potatoes, maize, and onions. It is the latter crop which they have grown in the last two cycles which has facilitated real change in the economic status of the women.

A delegation visited Nyarumvurwi recently to witness the work being done by the women. The delegation comprised representatives from Sida -the funding partner, ILO and UNWOMEN– the implementing partners, and government officials in the district who sit in the DIC (District Implementing Committee) (DIC) and coordinate project implementation at district level.

During the visit, the delegation visited several households where the women store their onion harvest which ranged from 5 – 14 scotch-carts full. The beneficiaries use their traditional kitchens as storehouses where they have set-up some basic structures to hang the onions from. The smoke from the fire also helps to keep the onions fresh. The women have also learnt about marketing strategies and hence they opt to keep their produce until market prices are favourable.

The impact the project has been wide-ranging, from individual to family and to the community in general. Some beneficiaries interviewed expressed economic power to improve the standard of living for their families through the procurement of household assets and livestock, payment of school fees, construction of bigger and better homes, as well as payment for the electrification of their homes. 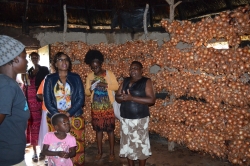