Lesotho, having ratified ILO Convention No. 81 in 2001, concerning Labour Inspection in Industry and Commerce, has an obligation to provide and maintain a system of labour inspection to secure compliance with legal provisions relating to conditions of work and the protection of workers in industrial and commercial workplaces.

Various studies in 1997, 2005, 2011 and 2012 pointed towards significant room for improvement regarding the performance of the labour inspectorate in Lesotho.

Examples include a persistent under-achievement with regard to the number of inspections carried out, skills and procedures that could be improved, the registration of workplaces that are liable for inspection being incomplete, a lack of cooperation with employers’ and workers’ organizations, lack of coordination with other inspectorates within the Government, a lack of incentives, a significant lack of use of modern technology and availability of transport to mention a few.

Based on the challenges briefly outlined above, the International Labour Organization (ILO) and the United States Department of Labour have partnered up in a Development Cooperation agreement to build capacity, provide support and strengthen Labour Inspection Systems in Lesotho over a 24-month programme commencing in 2016 and ending in 2018.

The programme is administratively decentralized to the ILO Pretoria office and will receive full support from the Pretoria Decent Work Team and Programme Office.

Through the improved labour inspection system, the workplace compliance with national and international labour standards will be improved, thus contributing to the continued improvement of conditions of work in Lesotho and the protection of workers while engaged in their work.

The long-term outcome of the labour inspection system in Lesotho is to better equip employer and worker organisations in achieving workplace compliance, to ensure adherence with nation and international labour standards.

Some of the immediate objectives of the project are quality inspections, improved cooperation of partners, improved coordination of government departments, improved working conditions and expansion of labour inspections in the informal economy. 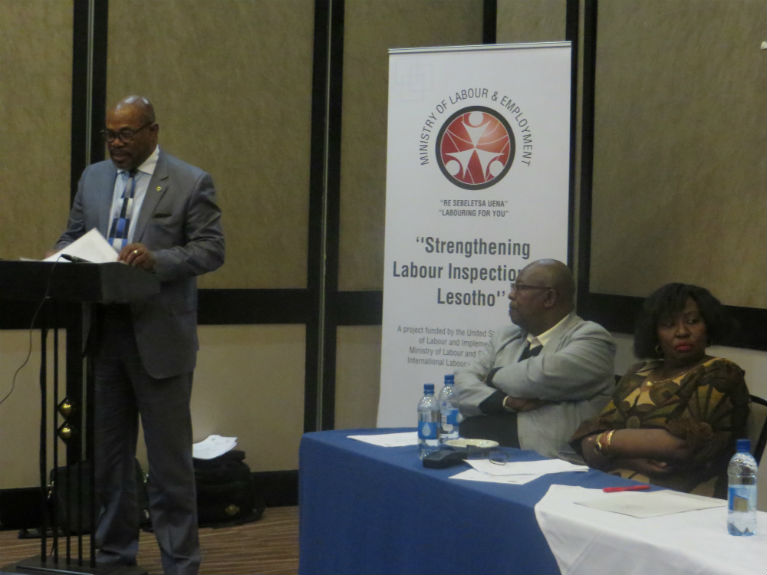