HARARE (ILO News) – The International Labour Organization (ILO) on 25 June 2021 launched a global campaign to promote the ratification and implementation of Convention No. 190 on violence and harassment in the workplace.

The campaign aims to explain, in simple terms what the Violence and Harassment Convention, 2019 (No. 190) is about, the issues it covers, and how it seeks to address violence and harassment in the world of work.

The public is invited to participate by downloading assets from the ILO campaign hub and sharing them on social media.

The global campaign will also reach out to governments, employers’ and workers’ organizations, civil society and private sector companies, as well as policy makers, businesses and partners. Celebrities will also lend their voices to amplify the campaign messages.

Zimbabwe has been ahead of this campaign by developing a National Strategy on the Elimination of Sexual Harassment and Gender-Based Violence in its formal workplaces. The Spotlight Initiative, an EU global partnership that aims to eliminate sexual and gender-based violence, including harmful practices, has supported this process. Largely based on ILO Convention No. 190, the Strategy seeks to protect all levels of workers, and other persons in the world of work, against SGBV in the workplace and ultimately create an environment that will lead to a reduction of gender based violence and harassment in the country’s workplaces.

With ILO technical support, nine private sector companies and the Public Service Commission have already developed policies and codes of conduct on SGBV and harassment in their workplaces. Further, over 6000 employees from Zimbabwe’s blue chip companies have been sensitised on the Convention, and from among them, a team of gender champions have been identified and trained to ensure education, knowledge sharing and peer support beyond the intervention.

The Country Office is also working with the Zimbabwe Congress of Trade Unions (ZCTU) through their education and awareness programmes targeting their membership, to strengthen women trade unionists’ capacity to advocate for SGBV policies and programmes in the workplace and general sensitisation on Convention No. 190.


Violence and harassment at work takes a range of forms and leads to physical, psychological, sexual and economic harm. Since the Convention was adopted, the COVID-19 pandemic has highlighted the issue further, with many forms of work-related violence and harassment being reported across countries since the outbreak began, particularly against women and vulnerable groups. 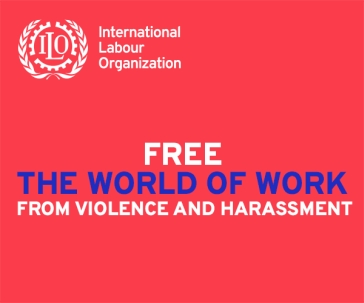