(ILO News, HARARE) The Spotlight Initiative, a global UN joint programme supported by the European Union to tackle gender based violence was launched in Zimbabwe on 26 June 2019. The initiative to be implemented by six United Nations agencies (ILO, UNDP, UNESCO, UNFPA, UNICEF, and UNWOMEN) is aimed at contributing to ending gender-based violence (GBV) by figuratively, shining the ‘spotlight’ on the problem.

This Initiative will see Zimbabwe receive USD34 million of the total EUR500 million availed globally by the EU towards programmes to end violence against women and girls at multiple levels. Zimbabwe is one of the eight countries in Africa to benefit from this fund.

The Initiative is a four year joint programme (2019-2022) aimed at changing the manner of doing business to effectively transform the situations and vulnerabilities of women and girls in Zimbabwe. It has six inter-connected and mutually reinforcing pillars, aimed at holistically addressing violence against women and girls on: laws and policies; institutions strengthening; prevention and social norms; services; data; and women’s rights movement.

The programme focus on prevention, protection of survivors, participation of communities and the provision of services to survivors, as well as increased reporting of cases of violence against women and girls.


In a speech read on his behalf at the launch, H.E President Emmerson Mnangagwa said that the Spotlight Initiative is viewed as an expression of the same political will that was demonstrated by the international community in adopting the Sustainable Development Goals, with Goal 5 focusing specifically on ending violence against women and girls, as well as the mainstreaming of gender across the entire 2030 Development Agenda.

He noted that the Initiative resonates with the provisions of the national Constitution and his government’s Transitional Stabilisation Programme (TSP), both which recognise gender mainstreaming in all sectors of the economy as an essential tool “to eliminate negative economic, social and cultural practices that impede equality of all sexes” and gender equality as “fundamental to achieving equitable, sustainable and inclusive socio-economic development.”

The President noted that cases of GBV, in particular violence against women and girls, have often gone unreported and are usually concealed within families.

At the same occasion, the UN Resident Coordinator to Zimbabwe, Mr Bishow Parajuli paid tribute to the EU’s technical and strong leadership in advancing human rights, including gender equality. He said that the United Nations is cognizant of the seriousness of the issue of gender-based violence in Zimbabwe, as is the case with the rest of the world; sharing the following statistics:
• 35% of girls and women aged 15-49 in Zimbabwe have experienced physical violence since age 15
• 14% have experienced sexual violence at least once in their lifetime
• 43% of girls 13-17 years reported that their first incident of sexual intercourse was unwanted.

Mr Parajuli emphasized the need to also understand the harmful social norms and practices that drive and normalise violence against women and girls.

The Government of Zimbabwe already has in place mechanisms and multi-sectoral structures, starting from the national level down to the ward level that address GBV. The enactment of the Domestic Violence Act in 2006 is a reflection of the Government’s highest level of commitment to eliminate violence against women and girls in Zimbabwe.

The country is also in the process of reviewing many laws to align them to the 2013 Constitution, which include the labour laws and introducing legislation aimed at ending child and forced marriages.

The Spotlight Initiative will build and support the development of a national strategy on gender-based violence including sexual harassment, which can then facilitate the establishment and strengthening of reporting processes to enable survivors to seek protection and services.

The ILO will implement components aimed at addressing violence and harassment in the world of work through the development of workplace codes of practice; knowledge sharing and promotion of women economic empowerment.


This focus links well with the newly adopted Violence and Harassment Convention, 2019 (No. 190) and Recommendation (No. 206) 2019. They both recognize that violence and harassment in the world of work “can constitute a human rights violation or abuse…is a threat to equal opportunities, is unacceptable and incompatible with decent work.” They define “violence and harassment” as behaviours, practices or threats “that aim at, result in, or are likely to result in physical, psychological, sexual or economic harm.” They remind member States that they have a responsibility to promote a “general environment of zero tolerance”.

The new standards aim at protecting workers and employees, irrespective of their contractual status, and includes persons in training, interns and apprentices, workers whose employment has been terminated, volunteers, job seekers and job applicants. It recognizes that “individuals exercising the authority, duties or responsibilities of an employer” can also be subjected to violence and harassment.

The ILO will, as part of the Spotlight Initiative, shine a light on these new standards with a view to popularize them and encourage the government to ratify and also apply in law and practice. This is especially so, in the context of a changing world of work as the ILO seeks to promote a brighter future of work. 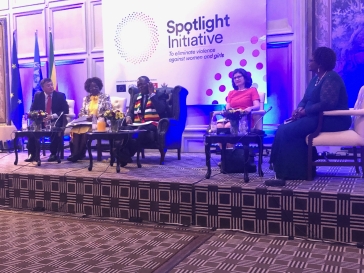