A presentation was delivered on the salient features of the draft standard and the importance of bringing concerns or contributions to the fore that will inform the final version of the standard.


The draft standard drew spirited debate on regional differences of sexual harassment, with many contributions digressing into issues that did not fall under the standard. Many of the delegates – referring to it as the ‘African position’ - asserted the role of culture, as central to defining and understanding of violence or sexual harassment, pleading that the standard should only provide guidance and not prescribe what countries should do. They wanted Africa to be left to find its own common ground on the topic that will guide national legislation.

Reminding delegates – comprising workers, employers and government representatives, ‘not to commodify’ people in the workplace as this was against the founding principles of the ILO in 1919, he bemoaned that 100 years later:

“Inequality is rising. Millions of people around the world are in a working poverty trap. In many societies, working people still labour antiquated working conditions that have little regards to their rights, with forced indenture and even forms of servitude and bondage common”.

He pointed that whilst technological advancement was welcome, he warned that ‘labour is not a robot and technology is there to support the worker rather than take over their life’.


In his response, the ILO Director General, Mr Guy Ryder, admitted that the report was not exhaustive but provided a platform to guide discussions on the future of work. He, among other things, acknowledged that the green economy discussed in the report, was already promising that it can create good, well-paying and sustainable jobs. He urged the assembled delegates not to be afraid of change that the future of work report is pointing at.

Responses from the panel of Ministers of Labour from Zambia, Malawi, Sierra Leone, Kenya and the Organisation of African Trade Unions (OATUU) – were varied and a pointer to the many debates that are going on since the official launch of the report on 22 January 2019. Some proposals specific to Africa were in support of special focus on the informal economy, rural economy, productivity, social protection, general respect of people’s rights, vocational training, migration, and the need for leadership to take responsibility.

They generally decried the limited budgets allocated to the ministries of labour, with one panelist claiming that ‘no-one fights to be a Minister of Labour because of the pittance of budgets to these Ministries. Acknowledging the absence of a common position by the tripartite constituents and the absence of social dialogue, another panelist urged the tripartite partners saying ‘when life is difficult, you don’t use a knife to cut the situation, you use dialogue’ 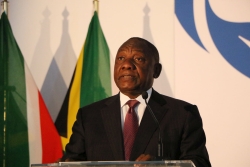