Seoul, 18 September 2012 (ACTRAV INFO)-A national trade union seminar held on 17-18 September in Seoul discussed the on-going trade union rights situation in the country and the need for the ratification of ILO conventions No.87 and No.98. The seminar jointly held by the two Korean national trade union organisations-KCTU and FKTU and the ILO ACTRAV was inaugurated by Dan Cunniah, Director of ILO ACTRAV, Kim, Dong-man, Acting President of FKTU and Kim, Young-Hoon, President of KCTU.

Speaking at the seminar, Dan Cunniah said, “I expect this seminar to provide an opportunity to discuss the legal and practical challenges in exercising trade union activities in Korea as well as to discuss the recommendations made by the ILO Committee of Freedom of Association (CFA) on the various cases relating to violation of trade union rights. I hope the seminar looks at the way forward to build a better industrial relations environment benefiting all social partners and enhancing the national competiveness.”

The seminar discussion was based on the findings of a study, titled “Fundamental Workers’ Rights in Korea in light of Internationally Recognized Labour Standards” and a trade union proposal for improving the “Trade Union and Labour Relation Adjustment Act”. 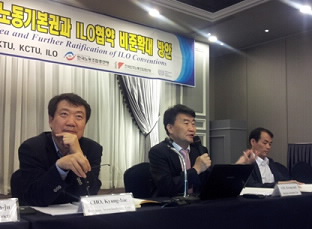 The government of Korea has yet to ratify four ILO core conventions on freedom of association and the right to bargain collectively (C87, C98) and the elimination of forced and compulsory labour (C29, C105). It has been more than 20 years since the Korean government joined the ILO in 1991. Also, the number of conventions ratified so far is only 28, falling far behind the OECD average of 63.

Despite the repeated recommendations made by the CFA on the revision of Trade Unions and Labour Relations Adjustment Act (TULRAA) to be brought in line with ILO standards, the laws continue to restrict trade union activities including denial of labour rights to workers engaged in disguised forms of works, restrictions to public sector workers on unionisation and right to collective bargaining. The obstruction of business and the judicial system have been used as a tool to curtail the leadership and activities of trade unions. The participants urged the government to amend the TULRAA and step forward the ratification of the core conventions to substantially improve labour standards.