DHAKA, 12 February 2012 (ACTRAV INFO) - An ILO delegation led by the Director of the Bureau for Workers' Activities, Mr. Dan Cunniah, met with the National Coordination Committee for Workers’ Education (NCCWE), an umbrella organization grouping the national trade union federations in Bangladesh. The main purpose of the Mission was to hold discussions with Ministries, employers, the ILO Office in Dhaka, and other organizations on the promotion of freedom of association and the strengthening of trade unions so that they can adopt a united approach on the challenges facing unions in Bangladesh. During the meeting, the positive contribution made by the ILO-ACTRAV capacity-building project was highlighted, as unions were able to undertake workers’ education and training activities to better understand workers’ rights, the importance of trade unionism, and assist in organizing. On behalf of the unions’ leaders, the secretary of NCCWE, Mr. Mujibur Rahman Bhuiya, highlighted the practical challenges and difficulties faced by unions in the country.

The ILO delegation also met with union activists trained by an ILO-ACTRAV project. During the meeting with the trade union educators and organizers trained under the project, the representatives narrated their individual experiences in forming trade unions, which included harassment, dismissal, blacklisting, assaults, and arrests. It was also alleged that factory owners had also connived with landlords to evict workers identified as union organizers from their homes. The trade unionists said that workers would like to be members of unions but were afraid that they might lose their jobs for supporting trade union formation. All agreed that the serious loopholes in the present labour law must be rectified. Despite the difficulties, there was a genuine commitment from the representatives to organize Ready Made Garment Industry workers and they asked that the ILO-ACTRAV should continue to support organizing training for union organizers, and workers’ awareness-raising and education campaigns. During the meeting, one union official talking on the situation of garment workers cited about a recent assessment of workers’ conditions in the RMG sector based on newspaper reports from December 2011 to February 2012. According to the study, seven (7) garment workers were killed due to accidents at the workplace, three (3) women were raped, 119 workers injured and 5 factories illegally closed down due to labour unrest. 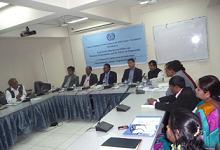