ACTRAV INFO: After a series of strikes in Chad, wages have gone up in your country. Has that been enough to satisfy your fellow workers?

Adjia François Djondang: Not really, no. This government measure comes after several years of demands by the Chadian trade unions. They kept on calling for the revaluation of the guaranteed minimum inter-occupational wage (SMIG). From 25,480 CFA francs, the SMIG was raised to 60,000 CFA francs. We demanded that this revaluation of the SMIG be applied to all social and occupational groups. Under pressure from the strike, the government adopted a decree on the SMIG and we accepted it in order to defuse the social situation in Chad.

Ever since gaining independence in 1960, Chad has been a member of the ILO. How far has your country got in applying the international labour standards – particularly on freedom of association and the right to collective bargaining?

Adjia François Djondang: As regards the basic Conventions on workers' rights, we notice that there are difficulties in applying these standards. There's political interference in union business. Not all the provisions of Conventions 87 and 98 are respected. Overall, social dialogue isn't easy in Chad. We have set up a national social dialogue committee which is tripartite and will soon be operational.

As far as Chad's workers are concerned, what are your expectations of the ILO?

Adjia François Djondang : We have already received support from the Bureau for Workers' Activities (ILO-ACTRAV) concerning respect for the tripartite delegations that must take part in ILO meetings at the regional and subregional levels. Recently, we notified the Committee on Freedom of Association following the adoption of a law on public sector strikes. This breaches the provisions of ILO Convention 87. We are waiting for the committee's ruling on this law. Turning to the Decent Work Country Programmes(DWCPs), I am bound to say that Chad and Central Africa in general have not yet made any visible progress there. But efforts are underway in Chad, together with the Union of Trade Unions of Chad, to ensure that our country can enjoy the benefits of these DWCPs, which will certainly improve the situation of our fellow workers. 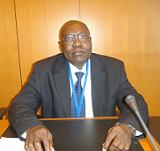