“From a very early age for whatever reason, I was drawn to horses. I read books about horses and actually came here to Spendthrift Farm,” says Ned Toffey, the General Manager at Spendthrift Farm in Lexington, Kentucky.

A thoroughbred racehorse breeding farm, Spendthrift Farm was founded in 1937 by American equestrian Leslie Combs II. The farm is named after a great stallion named Spendthrift. It’s more than 1,200 acres of land is home to Kentucky Derby winners and other champion winning horses.

Throughout the 80s and 90s the farm “fell on hard times and went through several different owners.” In 2004, legendary businessman B. Wayne Hughes who is the founder of the American International Storage Company purchased this iconic farm and brought Ned on board to work with him. The racing silks worn by the Spendthrift jockeys are red and orange which are the Public Storage colors.

“I came to work for Mr. Hughes when he bought the farm in 2004, and I was his only employee when we started. Through the hard work of our team, we have tried to build Spendthrift back into an important part of the horse industry,” Ned says.

Originally from Great Barrington, Massachusetts, Ned graduated from the University of Amherst with a degree in Sports Management, but with his lifelong passion for horses, he began working at a horse farm after college instead of taking a job in the city.

“Most of my peers went off to New York or Boston. I had interviewed for a couple of those jobs, but they weren’t especially eager to have me, and I wasn’t very eager to have them,” he remembers with a laugh. “I just couldn’t see myself ever living in a city.”

“I took a job at a horse farm in Upstate New York, and I thought I would enjoy it, while I looked for a real job. I worked there for a little under a year, and I decided that this was something I wanted to make a career out of.”

Although he wasn’t particularly sure what he wanted to be when he grew up, his penchant for horses and animals coupled with some serendipitous occurrences led him to his career.

“I remember going to my great uncle’s farm and I always having a love for animals,” he recalls. “But it took me a long time to figure out that it could actually become a profession for me. And then in college I happened to be roommates with someone whose family was in the horse breeding business, and it occurred to me that I could get into this profession.”

While working at the horse farm in New York, Toffey made sure to network and talk to as many people in the horse industry as he could. A trip to Kentucky landed him a job as a groom where he would be responsible for taking care of the horses and stalls.

“It was very hands on hard work, but I was not afraid and felt very fortunate to get the opportunity,” he states. “When I learned I got the job, I threw everything I had in a truck and drove for 14 hours to Kentucky and started work the next day!” he exclaims. 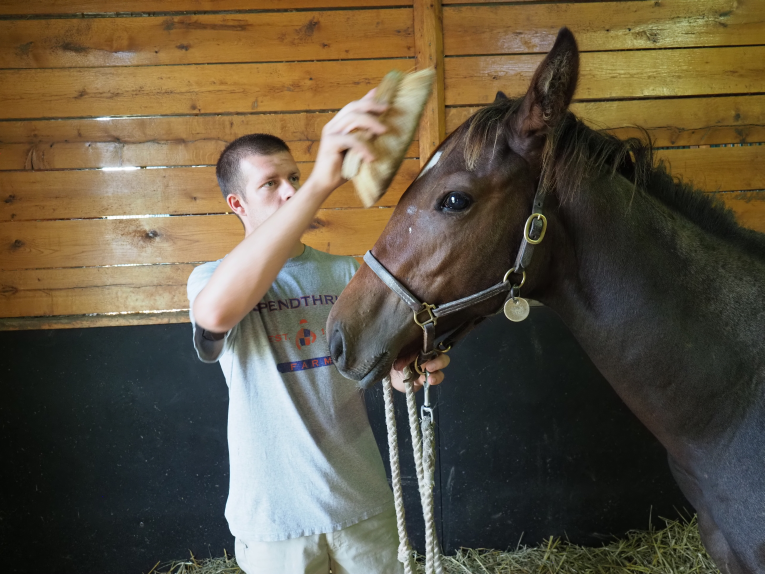 Hughes and his family as of 2004, was founded in 1937. The farm has over 1200 acres of land and welcomes many tourists annually. ILO Photos/ John Isaac

“Working as a groom gave me an incredible opportunity to learn, and the more I worked the more I loved it,” he smiles. “I was also lucky enough to marry a woman who wrote her middle school paper about her dream horse on a horse farm, so she was hooked when she found out I worked on a horse farm,” he recalls with a big chuckle.

In terms of the skills needed for his role as general manager, he underscores observation as key. “I’ve always thought that one of the most important attributes of a Horseman is observation,” he stresses.

“We use that pretty regularly with the horses, because they can’t speak and we have to observe them to find out what their needs are. And the same goes for people as well, as they don’t always tell you what’s on their mind. I also use observation in hiring the right people for the right positions, which is a big part of my job. I’ve been involved in hiring almost every employee here.”

A day at work for Ned begins by catching up with the many division managers whom he says he “relies heavily on,” followed by going “around the farm and checking on the various operations.” His afternoons are spent in his office where he takes care of the administrative issues.

In discussing what works means to him, Toffey says, “I feel very fortunate to be doing something that I love, which doesn’t even feel like work to me.” He also shares how proud he is of all the hard work he did that resulted in his current position.

“I wear all my hard work, especially from when I started out as a groom, as a badge of honor,” he proudly asserts. “I owe almost everything I have in my life to my job which stemmed from hard work,” Ned further emphasizes.

In terms of what success means to him Ned cites hiring the right people and setting them up for success. “A manager I had when I was starting out, told me that the mark of a good manager is that when you are away things run just as well. To me that means hiring really good people and putting them in a position to succeed, with the right tools and the right environment.”

As a father of four children, Ned hopes that his children have learned the importance of hard work from his wife and himself. “I hope that they have the discipline and willingness to work hard and to keep trying hard when challenges arise and things get tough,” he says.

“Working at Spendthrift has truly been the opportunity of a lifetime for me,” Toffey says, as he looks out to the horses grazing the fields. With all the hard work and dedication he has put into rebuilding the farm and its reputation, it seems following his love for horses and his desire to be at Spendthrift Farm was a good career decision for Ned.

*Editor’s note, on August 18, 2021, Spendthrift owner and businessman B. Wayne Hughes passed away in Lexington, Kentucky. Our condolences to his family, as well as the Spendthrift and Public Storage family.