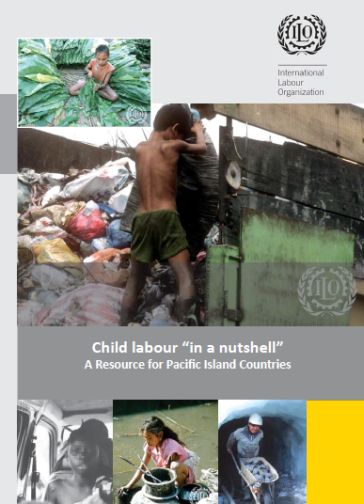 Download:
Child labour research studies conducted by the International Labour Organization’s TACKLE (Tackling child labour though education) programme, funded by the European Union, found that children in the Pacific Islands Countries can be susceptible to the worst forms of child labour, such as hazardous work, illicit activities, and commercial sexual exploitation. Poverty, illiteracy, poor academic performance and lack of employment opportunities aggravate risk and vulnerability to exploitation and abuse.

In the Pacific however, information and understanding on child labour is still lacking. This resource has been produced to enhance the knowledge base on child labour for Pacific Island Countries. "In a nutshell" clarifies child labour concepts and the ILO child labour Conventions and highlights the links between child labour and youth employment and the steps one can take to better protect young workers.