DHAKA, Bangladesh (ILO News) – Shahjadi Sultana is one of just a handful of female fire inspectors in Bangladesh.

Following her promotion to Warehouse Inspector in 2015, Shahjadi Sultana has checked some 500 establishments across Bangladesh for fire safety. However since taking part in specialized electrical safety training in late 2016 she is now able to assess important electrical systems with a more critical eye while carrying out inspections.

Organized by the International Labour Organization’s "Improving Fire and General Building Safety in Bangladesh" project funded by the US Department of Labor, the training helped participants gain knowledge of electrical engineering considerations as they apply to safety. The need for the training is clear. According to Bangladesh Fire Service and Civil Defence Department (BFSCD) figures, approximately 75 percent of fires in the garment industry are caused by electrical faults.

For Shahjadi, gaining knowledge of electrical safety issues marked another step in her development as an inspector. After joining the Fire Service in 1992 as a telephone operator – at a time when women were not allowed to work in the field – the inspector has slowly worked her way up through the ranks. Shahjadi is now one of five women working in fire service operations and inspection cells. She has been in the field for almost 14 years – 4 as a sub-officer and another 10 as the station officer at Chittagong’s Kalurghat – when she had to go out to numerous fires many of which were caused by electric short circuits. She now knows a lot more about reducing the danger of fires caused by electrical faults.

315 fire inspectors and representatives of the labour inspectorate and industry organizations took part in the three-day training sessions. These helped raise awareness of potential electrical safety hazards, build understanding on the design of fire detection and alarm systems as well as provide a basic understanding of schematics. Classroom work was complemented by field visits to help trainees put new skills into practice in a factory environment.

The new knowledge has been put to good use. “There are factories with their substations above the ground floor which should be on the ground floor. I have also found on a number of occasions that the earthing is not quite right and immediately drew the attention of the management,” Shahjadi explains. She adds that the standard checklist of points to cover while on inspections did not go into great detail when it came to electrical issues, as fire personnel typically did not have the skills or knowledge to identify certain hazards.

“In light of the training on electrical safety, new points will be added to the checklist to make the inspections more robust,” she says. The importance of the training is highlighted by Brig. Gen Ali Ahmed Khan, Director-General of the Bangladesh Fire Service and Civil Defence Department. “Electrical short circuits are the main cause of fires in the garment sector. This training will better equip the fire service to reduce this risk and ensure compliance with national codes and standards on building and worker safety, not only in garment factories but across all industries.”

Funded by the US Department of Labor, the Improving Fire and General Building Safety in Bangladesh project focused on improving fire and building safety in the Ready Made Garment sector. The project was carried out in close collaboration and coordination with relevant national and international stakeholders and partners and is expected to lead to enhanced enforcement of relevant fire and general building safety laws and regulations — consistent with international labour, fire and building standards and good practices.

The Bangladesh project is part of ILO’s Labour Administration, Labour Inspection and Occupational Safety and Health Branch efforts at building a global culture of prevention in the workplace. 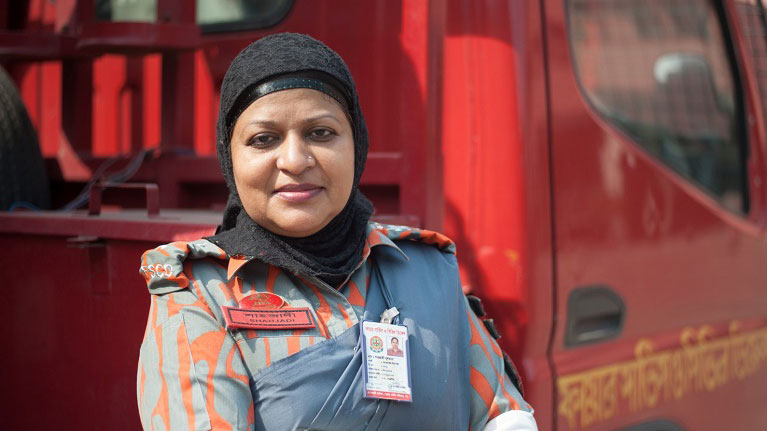