NEW YORK (ILO News) –Representatives of governments, workers, employers, foundations, civil society and other stakeholders gathered together at the United Nations General Assembly at a high-level breakfast meeting, to urge member States to ratify the ILO Convention on Violence and Harassment in the World of Work (No. 190). The Convention was adopted earlier this year, during the annual International Labour Conference. It is the first legal instrument to tackle violence and harassment in the world of work. Since its adoption, it has received broad public support, and the meeting made it clear that many member States are eager to be the first ones to ratify it. 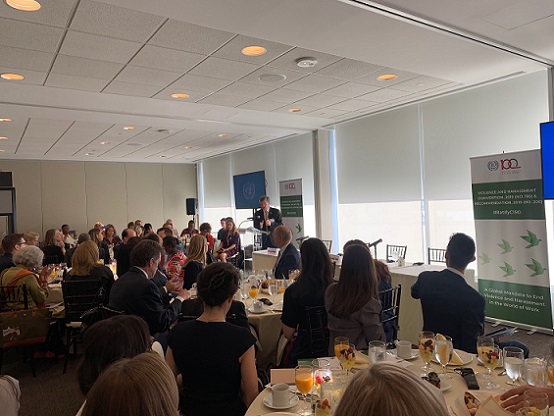 The Director-General of the ILO, Mr. Guy Ryder, opened the meeting and acknowledged that there was a consensus that the future of work should be free from violence and harassment. While the Convention was negotiated between governments, workers and employers, like all ILO Conventions, it was also evident that the general public was ready for change. It was now up to member States to step up action, and ratify and implement the Convention.

The Minister of Industrialization, Trade and SME Development of Namibia, H.E. Mr. Tjekero Tweya, pointed to the gendered aspect of violence and harassment, noting that any discrimination of women could not be tolerated. Addressing violence and harassment at work had to be based on a multifaceted approach, including more equal representation in the workplace, awareness raising as well as changing the laws based on the Convention. Similarly, the Secretary of State for Employment of Spain, H.E. Ms. Yolanda Valdeolivas García, stated that protecting workers would lead to decent, inclusive and more sustainable work. The Secretary also highlighted that new technologies had raised new challenges, and that violence and harassment could go beyond the physical workplace. Indeed, the Convention covers violence and harassment occurring in the workplace but also where a worker is paid, takes a rest, during work-related trips and events, among other places/situations. The Undersecretary for Foreign Relations of Argentina, Mr. Ambassador Luis Pablo Beltramino, affirmed his and other governments’ commitment to enact the Convention.

The ILO’s social partners were represented by Ms. Rose Omamo, General Secretary of the Amalgamated Union of Kenya Metalworkers and Mr. Roberto Suárez Santos, Secretary-General of the International Organisation of Employers. Ms. Omamo expressed her hope for the Convention to be domesticated and implemented in countries, and Mr. Suárez Santos highlighted that the Convention would not only impact women, but also other vulnerable people such as migrant populations and ethnic minorities.

The event was highly attended by the private sector and key allies. Among these was the CEO of C&A Mexico, Ms. Kelly Kroger, who highlighted that supply chains in the fashion industry were mostly operated by women, but the majority of supervisors were men. C&A had implemented annual supplier audits and anonymous, private interviews within factories. The UN Global Compact added that the Convention’s implementation would impact the behavior of companies and set the right policies and practices. The Director of Open Society Foundations’ Women’s Rights Program, Ms. Kavita Ramdas, expressed that various foundations have experienced great inspiration from the courage and aspirations of the Convention. It was a true, collective commitment to a future of fair work, one that would be particularly fair to workers. 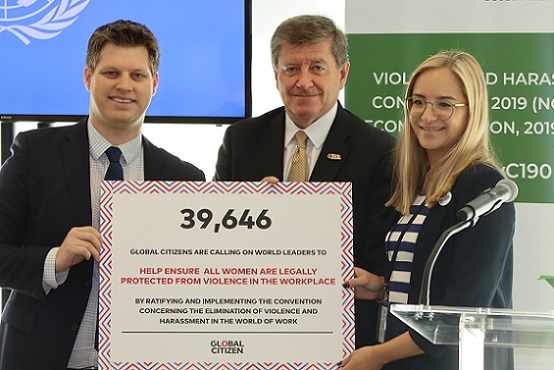 The event rounded off with a historic call to action from individuals around the world; Global Citizen gathered almost 40,000 signatures from individuals encouraging world leaders to ratify the Convention. Global Citizen’s Vice President of Global Policy and Government Affairs, Mr. Michael Sheldrick, and the Director of Global Policy and Government Affairs, Ms. Leticia Pfeiffer, officially delivered the signatures to the Director-General of the ILO. Given the landmark Convention’s broad and tripartite support, there is a strong urgency and readiness for member States to ratify the Convention and ensure a safe world of work, free of violence and harassment.