NEW YORK (ILO News) – During the opening of the Ministerial Segment of the High-Level Political forum for Sustainable Development (HLPF), the ILO Centenary Declaration for the Future of Work was officially transmitted to the United Nations. TheILO Centenary Declaration for the Future of Work was adopted during the 108th session of the International Labour Conference (ILC), which took place last month, in Geneva. The President of this year’s ILC, Mr. Jean-Jacques Elmiger, had the honour to deliver the document, with the presence of the Director-General of the ILO, Mr. Guy Ryder, to the UN leadership represented by the Secretary-General of the UN, Mr. António Guterres, the President of the General Assembly, Ms. María Fernanda Espinosa Garcés, and the President of ECOSOC, Ms. Inga Rhonda King.

Jean-Jacques Elmiger, President of this year’s International Labour Conference, transmits the @ILO Centenary Declaration for the Future of Work to the @UN!
The multilateral system must come together to shape a human-centred future for all! 🇺🇳💯 #ILO100 #myFutureofWork #ILC2019 pic.twitter.com/97dGm5nQel


The ILO Centenary Declaration for the Future of Work is a reaffirmation of the relevance and importance of the ILO’s mandate in the changing world of work, a strong statement of intent, a mobilizing call, and a road map for action by the ILO itself. It comes a critical point in time where the world of work is being transformed by technological advances, demographics and climate change. The Declaration calls for specific actions, including:


• The effective realization of gender equality in opportunities and treatment
• Effective lifelong learning and quality education for all
• Universal access to comprehensive and sustainable social protection
• Respect for workers’ fundamental rights
• An adequate minimum wage
• Maximum limits on working time
• Safety and health at work
• Policies that promote decent work, and enhance productivity
• Policies and measures that ensure appropriate privacy and personal data protection, and respond to challenges and opportunities in the world of work relating to the digital transformation of work, including platform work. 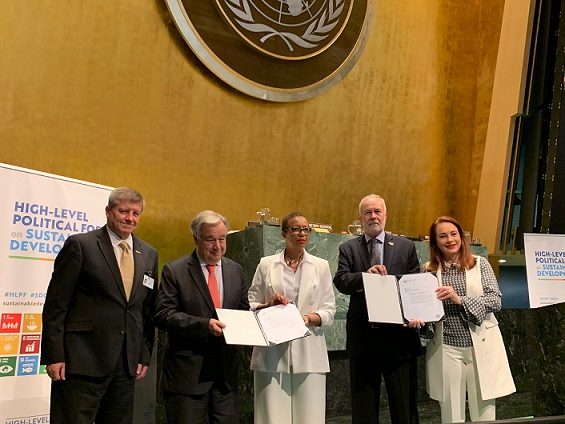 “The Declaration is ambitious – setting out the basis for delivering the ILO’s mandate in its second century. But the Centenary Declaration is much more than a statement of wishes or intent. The Declaration proposes a shift in the paradigm of how we look at development.” - Secretary-General of the UN, Mr. António Guterres

During this year’s HLPF, UN member States reviewed SDG 8, and Declaration will serve as a useful tool for further accelerating actions towards SDG 8 and the 2030 Agenda for Sustainable Development at large. It provides policy guidance for a human-centred future of work where no one is left behind, and it reinforces the importance of social dialogue and multilateralism.