NEW YORK (ILO News) – On April 10, a special session of the UN General Assembly took place to commemorate the Centenary of the ILO. The session, held in accordance with resolution A/RES/73/282, was under the topic of «The Future of Work», the ILO’s key focus for the years ahead. The meeting was convened by the President of the General Assembly, H.E. María Fernanda Espinosa Garcés, whose main priorities include Decent Work. UN leaders, the Director-General of the ILO, the ILO’s social partners as well as member States’ Heads of State, Ministers and representatives, took the opportunity to reflect on the ILO’s obstacles and achievements over the past 100 years and highlight policies needed to shape the Future of Work. 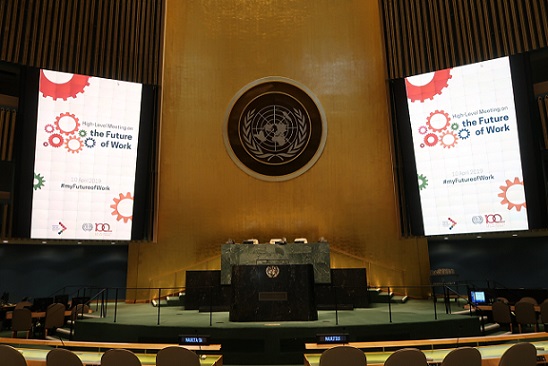 The President of the General Assembly underscored how far-sighted the ILO’s founders had been, during the Paris Peace Conference in 1919, when they understood that labor rights and cooperation between workers, employers and governments were essential for economic growth and lasting peace. Since then, the ILO’s over 180 Conventions have shaped labor legislation globally, covering a broad range of issues. Yet, it is clear that more work remains to be done, particularly on modern slavery, unemployment, the working poor, and the lack of social protection. Decent Work is critical to fight poverty and inequality, and it will be a continuous priority for the 73rd session of the General Assembly.

The Secretary-General of the UN noted the current disruption in the labor market, highlighting that technological change will create, change and remove jobs. There is profound uncertainty around this transformation, which makes expansion of social protection and a fairer globalization more essential than ever before. It was also underscored that technological improvements and innovations can be used to positively transform economies and assist the progress on the Sustainable Development Goals. 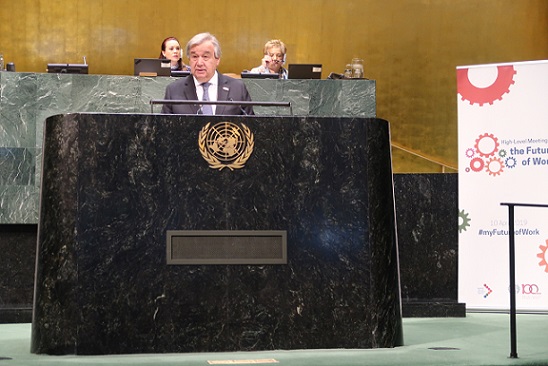 The Director-General of the ILO, Mr. Guy Ryder, described the ILO’s history, and, while it had not always been an easy road, significant progress on Decent Work had been made. It was both the ILO’s principles and its tripartite structure that had led to its 100 year long survival and success. The General Secretary of the International Trade Union Confederation, Ms. Sharan Burrow reiterated that, in a time of distrust in globalization and institutions, labor rights and standards could not be denied by the market. The President of the International Organisation of Employers emphasized business’ ambition to be a part of the solution, and it was important to have business-friendly environments and a skilled workforce.

The UN Major Group for Children and Youth representative, Ms. Jolly Amatya, stated that economic models had to be in accordance with the shared vision for a just and peaceful planet.

UN member States paid their tribute to the ILO’s remarkable history, and many expressed how significant the impact of international labor standards, as well as social dialogue, had been, and continuously is, at the country level. Several member States expressed concerns about discrimination in the world of work, child labor, forced labor and disparities in the care economy, and it was time to work together on these issues.

The special session of the General Assembly showed a clear, shared commitment to the ILO’s work. The tripartite structure of the ILO truly adds value to the UN family, and the ILO is seen as a living proof of the great accomplishments that can arise from consistent multilateralism. UN member States stand ready to shape the Future of Work with the ILO.