The Commission on the Status of Women opened its 63rd Session on Monday 11 March, 2019. Heads of State, Ministers of Gender, gender experts, workers’ organizations, employers’ organizations, civil society, academia and activists have gathered to discuss this year’s theme, “Social protection systems, access to public services and sustainable infrastructure for gender equality and the empowerment of women and girls”. In the opening plenary session, the United Nations Secretary-General, Mr. António Guterres, highlighted that economies can unlock trillions of dollars if women have equal opportunities in the labor force, underlining that equality in the workforce is critical for gender equality at large. 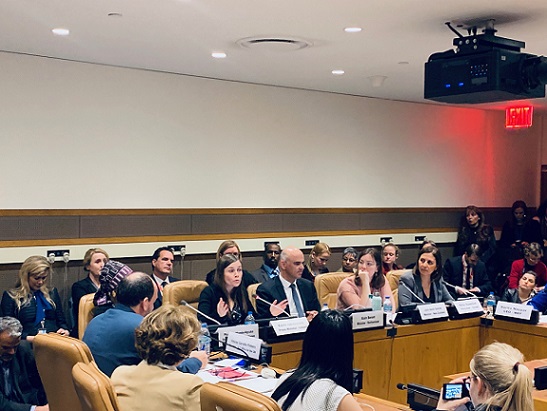 "As the ILO just found, women last year were 26 percentage [points] less likely to be in employment than men. Fewer than one-third of managers are women – even though they are likely to be better educated."
United Nations Secretary-General, Mr. António Guterres

On the evening of 11 March, the ILO Office for the United Nations, along with partners from the Equal Pay International Coalition (EPIC) and the Permanent Mission of Switzerland, hosted an event on “Closing the Gender Pay Gap”. At the current pace of development, it will take more than years to close the gender pay gap. While more women than men prefer to be in paid work and a higher share of women managers have a university degree compared to men, the gender pay gap persists at 20% and only 45% of women are employed compared to 71% of women. Unpaid care work is the main reason why women are outside the labour force. Across the world, 606 million working-age women perform unpaid care work on a full-time basis, compared to 41 million men.
During the panel discussion, the Prime Minister of Iceland, Ms. Katrín Jakobsdóttir, pointed out that it is necessary to also change the image of power and leadership, in order to get more women into managerial and leader roles. This would also have a positive impact on the gender pay gap. More work also needs to be done on the discrimination behind pay practices, as pointed out by the Minister, Head of the Federal Department of Home Affairs, of Switzerland, Mr. Alain Berset. The Minister for Women, New Zealand, Ms. Julie Anne Genter, added that it is critical to evaluate gender equality from an intersectional lense, as some women are more prone to pay discrimination than others, based on their ethnic background, sexual orientation, indigenous background, or other factors.
The panel discussion also included the Executive Director of UN Women, Ms. Phumzile Mlambo-Ngcuka; the Secretary of State for International Development and Minister for Women & Equalities, of the United Kingdom, Ms. Penny Mordaunt; Minister for Social Equality, of Israel, Ms. Gila Gamliel, and the Managing Director & Chief Operating Officer, World Economic Forum, Ms. Sarita Nayyar, who are all key players in the process to achieve equal pay and promote women’s economic empowerment.

Earlier this week, the ILO also hosted a discussion on the Future of Women at Work, related to the newly launched report, A Quantum Leap for Gender Equality – For a Better Future of Work for All. The report provides an overview of the current state of gender equality, and describes solutions for how to accelerate progress. It was a dynamic conversation with high-level representatives from the governments of Belgium, Canada, Uruguay and Tanzania, as well as the International Trade Union Confederation (ITUC), the United States Council for International Business (USCIB), Schneider Electric and the ILO. The governments highlighted their best practices for gender equality, including quotas. It is evident that both the rights-based case and business case for empowering women in the workforce are strong and clear. However, improvements in policy and practice can only happen when governments, employers and workers cooperate. A quantum leap, as opposed to hesitant incremental steps, is needed to achieve a better and more gender equal future of work.