The Minister, while welcoming Ms Nishimoto to India and recalling that India is a Founding Member of the ILO, indicated that ILO’s policies and Conventions have played a significant role in enhancing equalities in India and that India’s main objective is to have Decent Work that is inclusive. Mr Dattatreya reiterated the Ministry’s commitment to ensure social security for all and the need to ensure improved conditions for women. Referring to employment generation and skills development as India’s top priorities, he spoke about the vision of the Prime Minister of India, Mr. Narendra Modi, and his address to the 46th Indian Labour Conference emphasizing the importance of Make in India initiative and the linked Skill India as well as Digital India initiatives. He also spoke about the need for labour law reforms with appropriate consultation processes, while ensuring that workers interests are protected.

The Secretary reiterated the Government of India’s objective to eradicate poverty while ensuring that each and every worker has access to rights and dignity. He said that all the decisions of the Ministry of Labour and Employment are based on the concept of tripartism and consultations involving all stakeholders. Furthermore, job creation at every level and in every part of the country is India’s top priority. Both the Minister and the Secretary spoke about India’s responsibility to look after the coordination of the Asia Pacific Group (ASPAG) and the potential it offers for regional knowledge-sharing.

Ms Nishimoto reiterated the Office’s continued commitment to the ILO-India collaboration, especially with India’s growing global role. She stated that a number of countries are looking at India for its ingenuity and the strategic direction it takes, as well as the prospects for India to ratify the remaining four Core ILO Conventions. She was very encouraged by the Prime Minister’s commitment to dignity and rights of workers expressed at the recent 46th Session of the Indian Labour Conference. 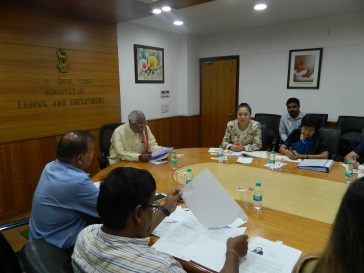