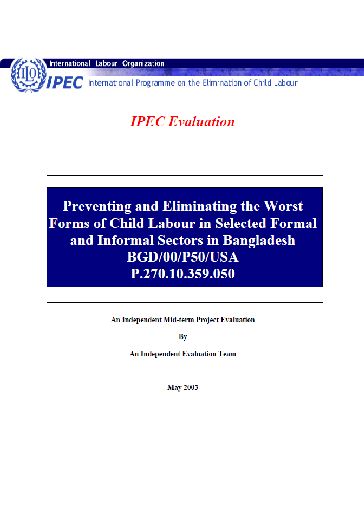 Download:
The Preventing and Eliminating the Worst Forms of Child Labour in Selected Formal and Informal Sectors in Bangladesh Project was launched in September 2000 with the aim to remove 30,000 children from hazardous occupations in 5 formal and informal sectors in different locations in Bangladesh. It also aimed to prevent younger siblings from entering child labour, to provide an increased understanding of the worst forms of child labour and to strengthen the Ministry of Labour and Employment (MOLE) so as to contribute to the systematic prevention and elimination of the worst forms of child labour. This report is the result of a final evaluation to review the project’s approach, strategy and implementation, to assess the extent to which the project objectives were met and the impact on target groups.