MOSCOW (ILO News) – On May 22, a solemn meeting attended by Maxim Topilin, Minister of Labour and Social Protection, and heads of the social partner organizations - Mikhail Shmakov, Chairman of the Federation of Independent Trade Unions of Russia (FITUR) and Alexander Shokhin, President of the Russian Union of Industrialists and Entrepreneurs (RUIE), was held at the Reception House of the Russian Foreign Ministry. Heinz Koller, Regional Director for Europe and Central Asia, represented the ILO Headquarters in Geneva. Speakers and honourable guests included Yaroslav Nilov, Chairman of the State Duma Committee on Labour, Social Policy and Veterans’ Affairs, and Anatoly Moskalenko, Vice President of LUKOIL, a company implementing a large-scale project for promotion of youth employment jointly with the ILO.

In opening the meeting, Olga Koulaeva, Director of the ILO Moscow Office, pointed out that “the principles of tripartism and social justice declared by the ILO are as relevant today as they were a hundred years ago”. She cited President Vladimir Putin who said at a recent meeting with Guy Ryder, ILO Director-General, that “Russia and ILO have close and constructive cooperation” and that many things are being done in coordination and consultation with the ILO.
In his presentation, Maxim Topilin expressed the same idea saying that “for many years major importance has been attached to cooperation with the ILO, and this cooperation is productive”.

Heinz Koller made a brief overview of the ILO history from 1919 until present with a particular focus on the Global Commission on the Future of Work Report “Work for a Brighter Future” for which Olga Golodets, Deputy Chairman of the Russian Government and Global Commission member, made a “valuable contribution”. Mr. Koller reminded that a centenary session of the International Labour Conference to be attended by more than 40 heads of state and government worldwide will be held in Geneva in June. The Russian delegation will be headed by Dmitry Medvedev, Chairman of the Russian Government. It is expected that the ILC delegates will adopt a major declaration, ILO Centenary Outcome Document, to guide the ILO in a new centenary of its history. 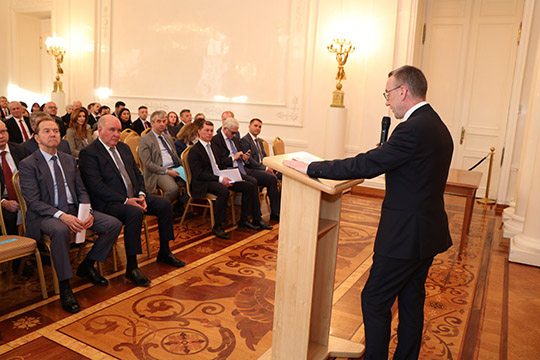 According to Grigory Karasin, State Secretary and Deputy Minister of Foreign Affairs of Russia, “the noble mission of the International Labour Organization is hard to overestimate. It is one of the core agencies of the UN system consistently promoting the principles of tripartism”.

The high point of ceremonial events was the opening of the ILO centenary exhibition at the State Duma on May 23 organized with support of the State Duma Committee on Labour, Social Policy and Veterans’ Affairs. 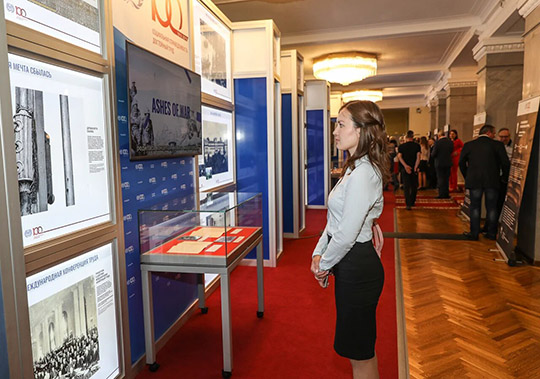 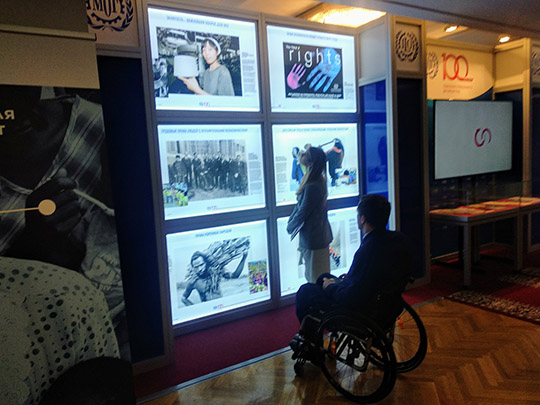 Yaroslav Nilov, Chairman of the Committee, praised the cooperation between Russian MPs and the International Labour Organization. Consultations with ILO experts to examine the proposed draft laws for compliance with international labour standards have already become a usual practice. The process of ratification of the ILO Conventions is progressing well. With 77 Conventions ratified, Russia boasts one of the best indicators across the region. A delegation of the Russian parliament recently visited the ILO headquarters and became familiar with the work of its various departments. Such cooperation should be continued and encouraged. 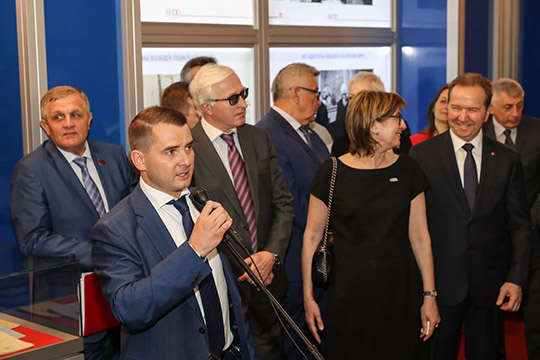 As Olga Koulaeva, Director of the ILO Moscow Office, pointed out, “in today’s ever evolving and complex world with its new technologies, dramatic demographic and climatic changes we are there to propose a human-centered political agenda. As one hundred years ago, we will work for the idea of social justice which is at the core of the ILO”. 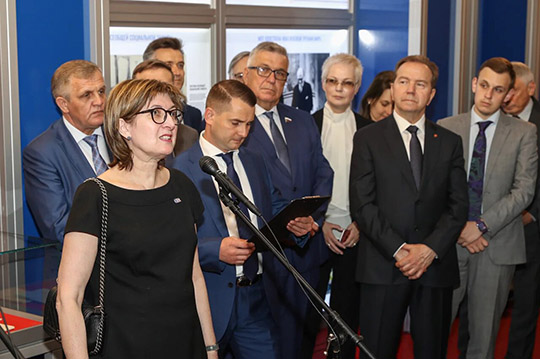 For Mikhail Shmakov, FITUR Chairman, the ILO centenary was “an event of civilizational nature and global importance”. The ILO created a unique mechanism allowing  to resolve conflicts at work through negotiations. According to Mr. Shmakov, this mechanism in Russia is “the best worldwide”: with the Russian tripartite commission for regulation of social and industrial relations and tripartite regional commissions in place, this system “operates on a regular basis and supports social stability within society which should be reinforced and promoted”. 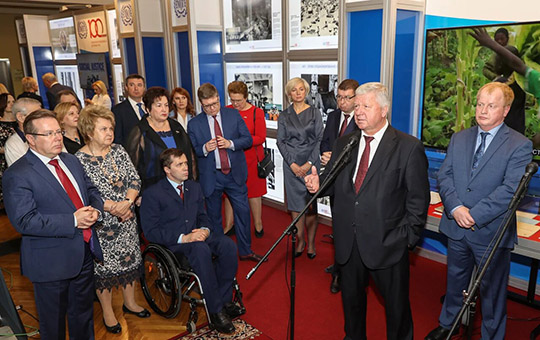 In developing the idea why tripartite cooperation between the government, employers and workers is so important, Alexander Shokhin, RUIE President, reminded that the Presidential Decree and later the law on the Russian tripartite commission were among the first instruments adopted by the new Russian government in late 1991 to make tripartism part of the economic and social system of Russia. “This system helped to live through the 1990s and the periods of crisis. Its ability to operate at the federal, regional and international level provides a solid basis for addressing many social and economic issues”, Mr. Shokhin said. 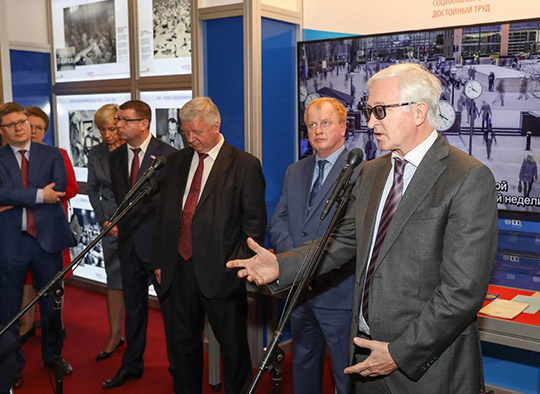 Andrei Pudov, Deputy Minister of Labour and Social Protection, stressed that “the ILO’s international experience is being used to improve the quality of life and social standards in Russia”. Among the landmark ILO Conventions ratified by Russia, Mr. Pudov mentioned Social Security (Minimum Standards) Convention No. 102, in particular, setting a clear ratio between average pensions and average earnings. In this regard, the section of the Centenary Exhibition provided by the ILO Social Protection Department was of particular interest to the visitors. 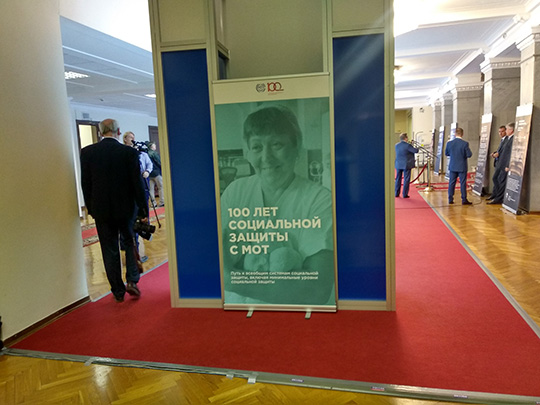 The stands dedicated to the Partnerships for Youth Employment in the CIS, the first ILO project in Russia involving a private company, LUKOIL, is a major part of the ILO centenary exhibition. The first agreement between LUKOIL and ILO was signed in December 2012. Beneficiary countries were Russia, Azerbaijan and Kazakhstan (with six other countries — Armenia, Georgia, Kyrgyzstan, Tajikistan, Turkmenistan and Uzbekistan — participating in the project’s regional events). The pilot regions in Russia were the Khanty-Mansi Autonomous Region (Yugra), Perm Region and Kalmykia. At the second phase in 2017 the project was extended to Uzbekistan, while in Russia a decision was made to add the Komi Republic, Astrakhan and Kaliningrad Regions. In his presentation, Anatoly Moskalenko, Vice President of LUKOIL, expressed his satisfaction with the outcomes of cooperation: “The experience gained in the course of this project allows us to extend the best practices and models developed in six pilot regions to 62 other regions where we operate, and to apply the experience of three project countries to 43 countries in which we are represented”. 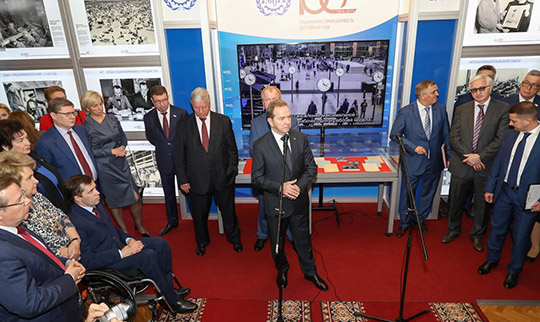 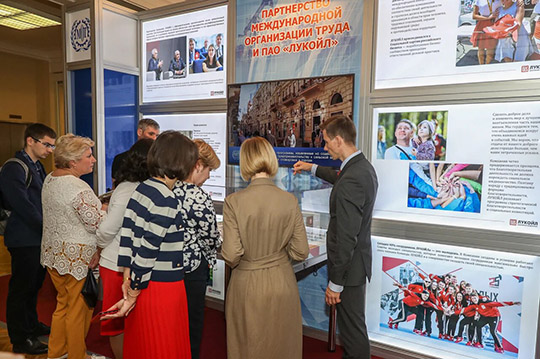 The ILO centenary exhibition continues at the State Duma.