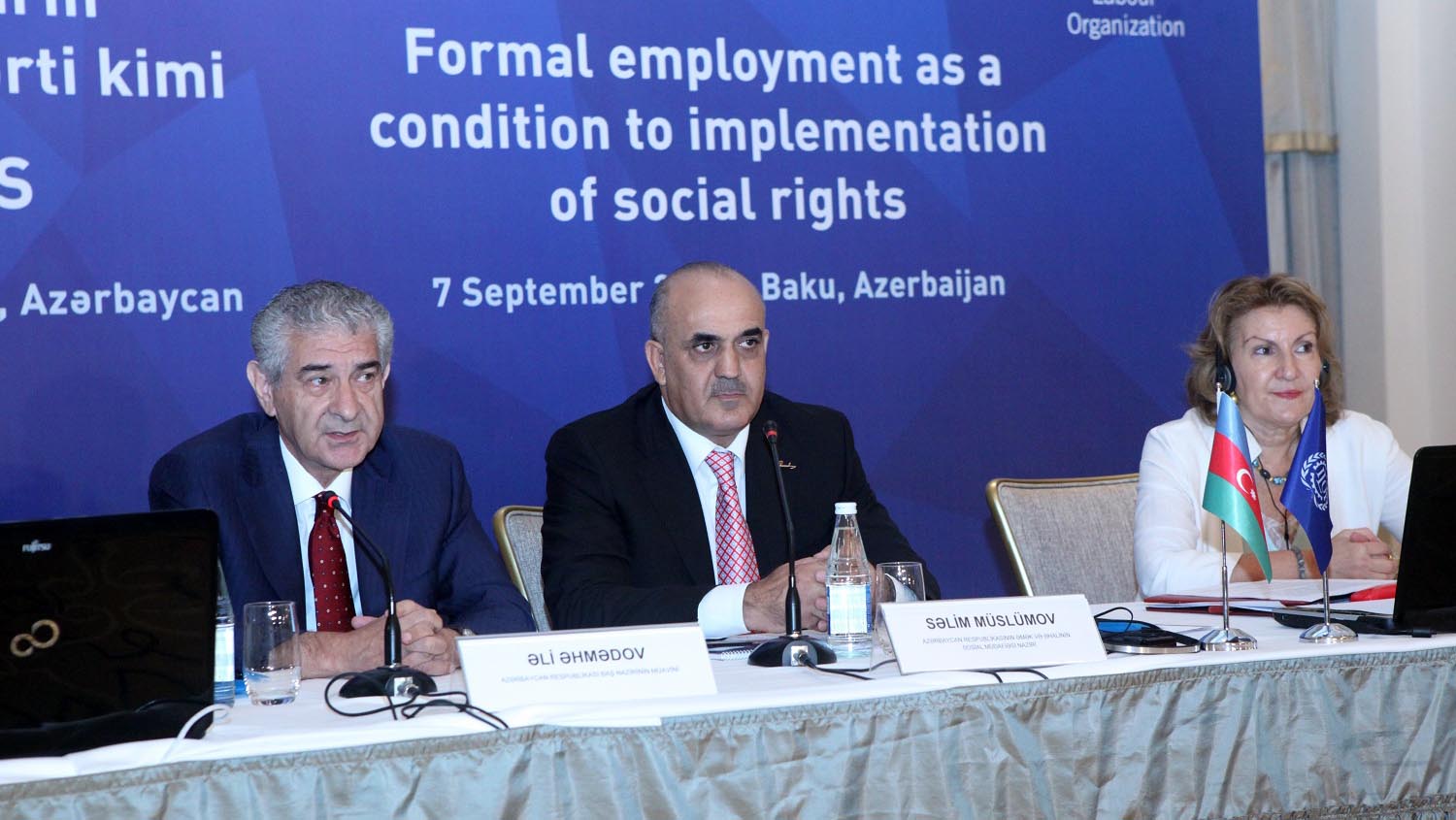 The event, co-organized by the Ministry of Labour and Social Protection of Azerbaijan and the ILO, was attended by Ali Ahmadov, Deputy Prime Minister and Chairman of the Commission on Regulation and Coordination of Labour Relations; Salim Muslumov, Minister of Labour and Social Protection of Population of the Republic of Azerbaijan; Sattar Mehbaliyev, Chairman of the Azerbaijan Trade Unions Confederation and Member of Parliament; Mammad Musayev, President of the National Confederation of Entrepreneurs (Employers) of the Republic of Azerbaijan; Azita Berar Awad, Director of the ILO Employment Policy Department; Frédéric Lapeyre, Head of the Informal Economy Unit, ILO; representatives of  governmental and non-governmental organizations and international experts. 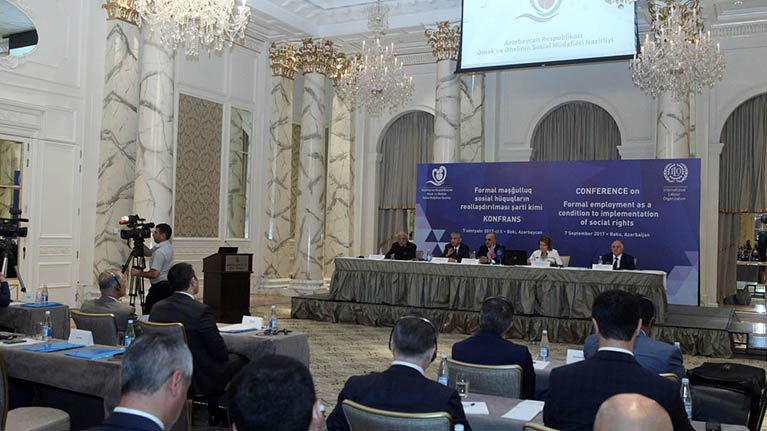 Addressing the conference, Ali Ahmadov, Deputy Prime Minister of Azerbaijan and Chairman of the Commission on Regulation and Coordination of Labour Relations, said that 100,000 new jobs should be created every year to avoid a decline in formal employment in the country.

Ahmadov also stressed that some 1.6 million new jobs have been created in Azerbaijan in recent years, lowering the unemployment rate to five percent.

"The main priority for the Government of Azerbaijan is to ensure employment and protect the social rights of those who are employed. Today, the government is working to implement large-scale projects aimed to safeguard social rights. In turn, the need to protect people's rights brings the issue of formal versus informal employment to the fore. The Government's priority is to provide people with employment, and once this problem is solved – and we can say that it has basically been solved by now – the status of employed population is our next priority. Therefore today, the government has been working to ensure a gradual transformation of informal employment into formal employment," Ahmadov said.

"As of end-2016, the number of informally employed citizens stood at 805,000 to 900,000. In other words, we are facing an important objective of engaging 900,000 people in formal employment," said Salim Muslumov, Minister of Labour and Social Protection of the Population of Azerbaijan, addressing the conference. Minister Muslumov also noted that the Government of Azerbaijan has been taking steps to create a legislative and regulatory framework for supporting people's engagement in formal labour relations. "Providing formal employment will contribute to strengthening workers' social rights," he emphasised.

In her opening address, Azita Berar Awad, Director of the ILO Employment Policy Department, congratulated Azerbaijan for giving priority attention to formal employment as a condition for the realisation of social rights and placing it high on the country's policy agenda. She welcomed the conference as an opportunity to examine the complexity of issues that result in informality and referred to numerous examples of countries showing that with dialogue and sustained efforts, tangible progress towards formalisation can be made.

Azita Berar Awad also mentioned a number of long-term joint projects between the ILO and the Government of Azerbaijan, such as a review of macroeconomic policy framework in Azerbaijan and joint preparation of a new National Employment Strategy for the of period 2017 to 2030 paving the ground for the realisation of the SDGs, in particular SDG 8 on full, productive employment and decent work, as well as initiatives in the sphere of youth employment and formalisation.

Azita Berar said, ”We believe that applying the ILO Recommendation 204 concerning Transition from the Informal to the Formal Economy adopted by the International Labour Conference in June 2015 and adapted to the realities in Azerbaijan will make a positive impact on progress in achieving SDGs in Azerbaijan.”