Three Russians that live with HIV for over than 10 years urge to pass HIV test and start timely treatment in case of a positive result in a set of communication materials developed by International Labour Organization (ILO) under its global Initiative “Voluntary Confidential Counselling and HIV testing at the Workplaces”- VCT@WORK.


The materials were developed jointly with Sverdlovsk AIDS territory ahead of World AIDS Day, which promoted the right to health. Everyone, regardless of who they are or where they live has a right to health. People in working age should be healthy and productive. 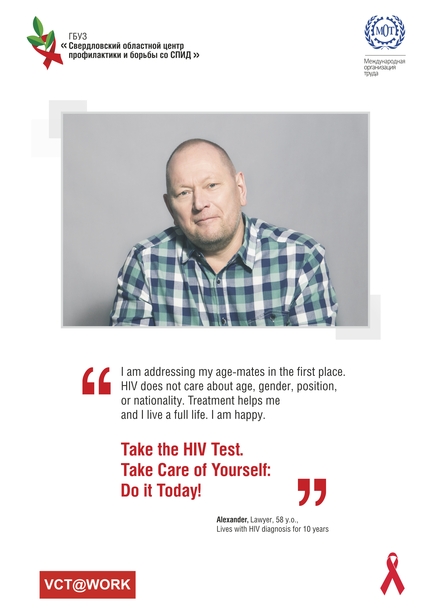 The personal stories of Aleksander (lawyer), Paulina (lawyer), and Svetlana (psychologist) show that HIV-infection can enter life of any person and that timely treatment enables to continue fruitful and full-fledged life, get an education, succeed in profession, have a family and healthy kids. 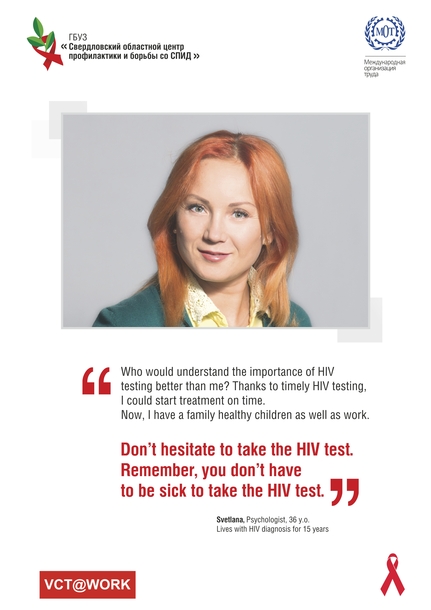 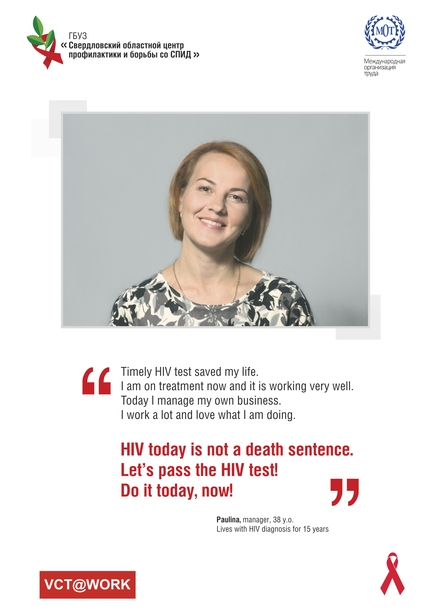 This is demonstrated by three inspiring stories. Paulina manages her own small business and lives with HIV 15 years, she addresses the audience with the following words: “Timely HIV test saved my life. I am on treatment with some delay but it is working very well – I am alive and feel fine. Today I manage my own business. I work a lot and love what I am doing. HIV today is not a death sentence. Let’s pass the HIV test! Do it today, now!” 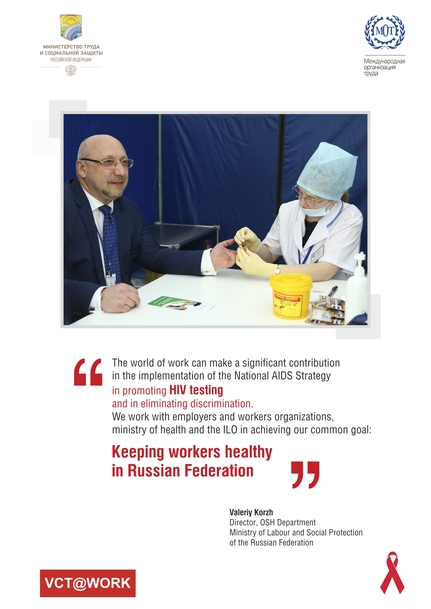 Five posters involving leaders from the world of work have been developed. One of them presents Mr. Valeriy Korzh, Director of OSH Department or the Ministry of Labour and Social Protection of the Russian Federation during passing an HIV test at the All-Russian OSH Week 2016 in Sochi. “The world of work can make a significant contribution in the implementation of the National AIDS Strategy in promoting HIV testing and in eliminating discrimination”, - says V. Korzh addressing workers and tripartite constituents at all levels. 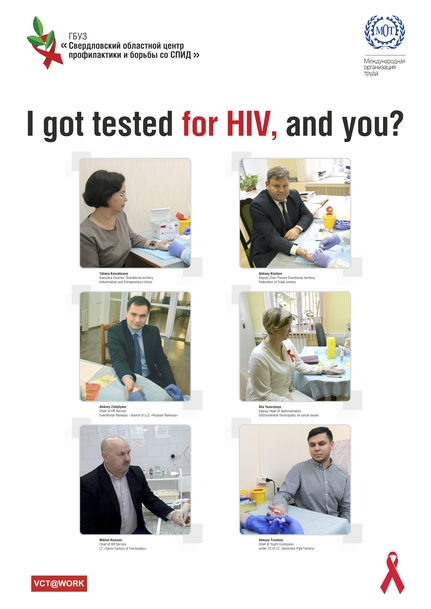 In a strong message- “I passed HIV test. What about you?”-  leaders of the world of work from Sverdlovsk territory gave their examples of passing an HIV test. Deputy Heads of employers’ and workers’ unions, deputy head of municipality, three representatives of the large industrial enterprises – “Sverdlovsk railroads”, “Serov Ferro-alloy Factory”, and “Severskiy Pipe Factory” state.

ILO Global Initiative “Voluntary Confidential Counselling and HIV testing at the Workplaces” is being implemented since June 2013 in 30 countries around the world including Russia. Till the end of 2016, over 6 million workers were reached by detailed information on HIV and AIDS including HIV testing and treatment. Over 4 million of them took the HIV test; received counselling and 103,000 who tested positive were referred to treatment.

ILO works closely with its constituents and AIDS territories in Russian Federation under its VCT@WORK Initiative. Sverdlovsk territory AIDS Center and ILO have organized training programmes for enterprises, unions and labour department on HIV and AIDS and the work of work in Ekaterinburg. The communication package having videos and posters is meant to further boost the VCT@WORK initiative in the region and in the Russian Federation.