MANILA- A new report published by the International Labour Organization (ILO) shows that the Philippine economy experienced robust rates of growth and made important gains in the labour market in recent years, however, more focus on decent and productive jobs is necessary to foster inclusive growth.

The ILO’s Philippine Employment Trends 2015 report finds relatively high economic growth rates of recent years, reaching 7.2 per cent in 2013 and 6.1 per cent in 2014.

Amidst robust economic growth and positive trends in the labour market, the Philippines was hit by major disasters and crises which have disrupted the local economy and affected key industries.

“These natural disasters and crises destroy jobs, livelihoods and other sources of income, and often reverse recent achievements and progress made at the individual, community and national levels. To build back better, it is crucial to put decent work and livelihoods at the forefront of recovery after the disaster,” said Lawrence Jeff Johnson, Director of the ILO Country Office for the Philippines.

Youth unemployment rate declined slightly from 17.4 per cent in 2008 to 16.1 per cent in 2013. However, 1.4 million young people account for one-half of the total unemployed and are almost three times more likely than their adult counterparts to be unemployed. The unemployment challenge is primarily a youth phenomenon, which includes those who are relatively educated in search of better options.

Decent employment remains a top priority in both the Philippines’ and international development agendas. Full and productive employment and decent work for all currently is proposed as a Post-2015 Sustainable Development Goal (SDG) by the United Nations.

The ILO report stresses that it is vital to ensure that growth translates into better labour market outcomes, including lower shares of vulnerable employment and working poverty.

“It is not the level of economic growth, but how we achieve growth with impact on people’s lives and the society,” said Johnson.

To support the creation of quality jobs and poverty reduction the report recommends: 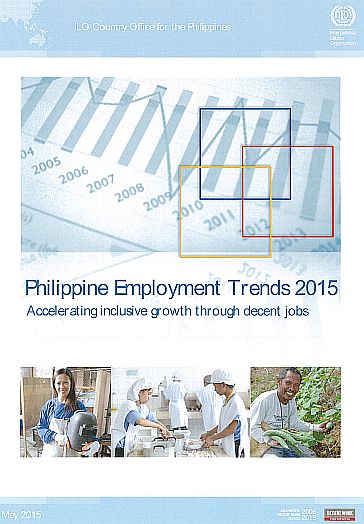