Pakistan is the sixth most populous country in the world with an estimated population of 184.35 million in 2012-2013, and has the 9th largest labour force in the world. Due to limited employment opportunities at home, Pakistan has seen a steady increase in the number of workers moving to other countries in search for work. From 1971 till April 2015, 8.1 million Pakistanis have officially proceeded abroad for employment.

To improve governance of labour migration from Pakistan, the Ministry of Overseas Pakistanis & Human Resource is focusing on improving access to accurate and relevant safe migration information prior to departure. In this regard, the ILO SALM project is working closely with the Ministry to set up MRCs and has set up the first ever such centres in Islamabad and Lahore.

The team of nine staff from the two MRCs in Pakistan accompanied by ILO SALM project staff observed four models of MRCs in Nepal: one MRC operated by the Foreign Employment Promotion Board (FEPB) located at the Labour Village, one national level MRC operated by the FEPB, one MRC located at the Department of Passport, and one district level MRC located in the District Administrative Office in Dhanusha district, Janakpur. The four models of MRCs presented a variation in the structure and operational modality along with different strategies of service delivery catered to the specific characteristic of potential migrant workers. The visit was co-funded by the International Centre for Migration and Policy Development (ICMPD) through the Silk Routes Partnership for Migration. The ILO implements the two MRCs in Pakistan in close partnership with the ICMPD. 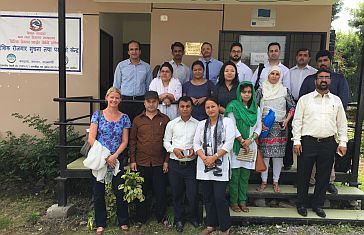 Promoting the Effective Governance of Labour Migration from South Asia through Actions on Labour Market Information, Protection during Recruitment and Employment, Skills and Development Impact (in Nepal, India and Pakistan)
Skip to top