The New Growth Path released by the Economic Development Minister Ebrahim Patel in December 2010, has set job creation as a country priority, aimed at reducing unemployment by 10 percentage points by 2020, down from the current rate of 25 per cent.

Joseph Stiglitz, Nobel economics laureate and recipient of the ILO Decent Work Prize, commented these adverse positions as “inevitable” for an emerging economy striving for a durable developmental path. "I believe that it [the New Growth Path] correctly puts employment (in the vocabulary of the International Labour Organization, ‘decent work’) at its centre. It seeks to build a long-term foundation for a vibrant society, in contrast to the short-termism of unregulated markets, made so evident in the recent crisis," he said.

The New Growth Path has fixed six priority areas to job creation: infrastructure development, agriculture, mining, manufacturing, the "green" economy and tourism. "There are many dimensions to a successful growth strategy that are reflected in the New Growth Path. Some involve direct government actions — investing in economic infrastructure that will earn future returns and tax revenue — but many entail simply setting the rules of the game”, Stiglitz said.

The job creation programme has met some opposition from both business and labour representatives, who claim the programme lacks the concrete measures required to fight soaring unemployment and create decent jobs. While employers complained about too much state intervention, unions rejected a possible wage freeze in the private sector.

The Congress of South African Trade Unions (COSATU) called for a revision of the New Growth Path to include public healthcare and education and expand training opportunities. "The only mention is that the public service can generate 100’000 jobs in health, education and policing by 2020. This [the New Growth Path] underestimates the role of the public sector," Cosatu statement issued in December 2010 read.

The debate about whether South Africa needs jobs or decent work has been going on for a long time. Labour brokering, systemic unemployment, especially among the young people, labour laws loopholes, vulnerable workers and working poor are just a few of the problems the country had to tackle even before the 2008 crisis hit.

The ILO and its South African constituents are currently reviewing policy options for an integrated application of the Global Jobs Pact. Bulgaria, El Salvador, Indonesia, Jordan, and Mongolia have also requested ILO support for this approach.

The Second phase of the Expanded Public Works Programme (EPWP) will create over 400’000 job opportunities by 2014 in Limpopo province, which will represent nearly 10 per cent of the national target of new jobs to be created by 2020 through the New Growth Path. 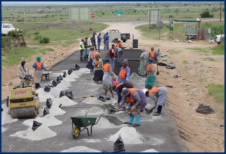 The Expanded Public Works Programme (EPWP) was established in 2004 to provide essential services and infrastructure facilities to disadvantaged communities, including skills development and training opportunities for the unemployed. It was further developed under the auspices of the Employment Intensive Investment Programme (EIIP), an ILO programme which supports governments, employers, unions and community-based organizations to enhance investment in infrastructure development and improve community access to basic goods and services.

The first phase of the EPWP, implemented between 2005 and 2009, created more than 100’000 work opportunities. The second phase will be carried throughout December 2014.

"The ILO technical team has made a significant contribution to the achievements of the EPWP in Limpopo," said Molebatsi Masedi, EPWP Spokesperson. 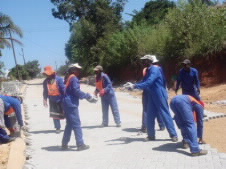 Masedi said some of the major EPWP achievements in the region include training and capacity development in which 438 project managers, 137 consultants and mentors from Limpopo and other provinces attended reorientation courses in Labour Intensive Construction (LIC). The programme also provides technical advisory support on planning, design and project management in the implementation of infrastructure works, to all local and district municipalities and provincial departments.

"As a result of the ILO interventions, the provincial EPWP has managed to create a number of employment opportunities through the provisions of infrastructure works and other public services," said Masedi.