Organized jointly by the Caribbean Development Bank (CDB) and the International Labour Organization (ILO), the symposium reviewed crisis responses and recovery measures in the region with a focus on the development of road maps for national policy strategies and resource mobilization.

The symposium was also attended by representatives of regional governments, labour unions and employer organizations and of the International Monetary Fund (IMF) and the Inter American Development Bank (IDB). 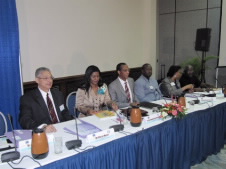 The President of the Caribbean Congress of Labour, Senator David Massiah, reiterated the tripartite support for the Pact and its provisions. He said that there was a need for a ten-year plan to aid the region in handling the recession. “We also have the capacity to create early warning systems to advise us of impending turmoil in our economic system,” Massiah said.

Director of the ILO Office in the Caribbean, Dr. Ana Teresa Romero said there is need for a "broad-based dialogue on the appropriate mix of policies for promoting economic growth, investment and productive employment in the context of decent work". ILO's Decent Work Agenda, developed through decent work country programmes in conjunction with the Global Jobs Pact and endorsed by the Caribbean Community (Caricom), is a multi-pronged approach to promote productive work that delivers a fair income, security in the workplace, social protection for families, freedom for people to express their concerns and equality of opportunity and treatment for all women and men.

CDB president, Dr. Compton Bourne had told last year's ILO Working Party on the Social Dimension of Globalization in Geneva that the regional development bank had been actively involved in the recovery process in the region through various actions, including granting policy-based loans "as a means of budgetary support to Caribbean governments”. Given the fiscal limitations of Caribbean governments, financing of the recovery depends heavily on access to resources from regional and multilateral development banks and from international financial institutions. He has drawn attention to the fact that the Caribbean and other middle-income countries benefited only to a limited extent from the resources committed by the G20 in 2009. "A key principle underlying these interventions is that plans for economic and social development and poverty reduction should not be derailed by what ones hopes is a short term economic crisis," Bourne added. 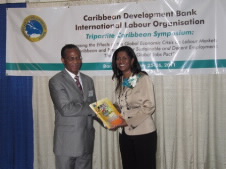 The International Monetary Fund forecasts growth for the Latin American and Caribbean region as a whole to be around 4 per cent in 2011. However, the Caribbean may struggle to reach this pace. as its major trading partners, the USA, Canada and the European Union are projected to grow at only 2 per cent, 2.7 per cent and 1.7 per cent respectively.

Countries in the Caribbean face a continuous decline in outputs in the areas of agriculture, light industry and tourism. 2009 registered a lower demand for the region’s commodity and manufactured exports, a fall in receipts from tourism and some declines in remittances from workers of Caribbean origin. This in turn affected the demand for labour in the region which, as a result of reduced employment and wage incomes, added to the downward economic spiral

Stephen Pursey, Director of the ILO Policy Integration Department, said in his presentation that the Caribbean countries, as part of a global world facing the crisis, have to equally be part of the global solution.

Many Caribbean countries have already adopted policies that correspond closely to those advocated in the Global Jobs Pact, which is founded on the concepts of tripartite action at home connecting to partnerships with other countries and international agencies.

“Support for small businesses, efforts to improve social protection, measures to strengthen skills and policies to help women, men and young persons find jobs or continue their education, training and re-training are being widely used in the region to mitigate the damage caused by the recession and strengthen recovery,” Pursey said.

Nevertheless the integrated approach proposed by the Pact, in which a package of policy measures work together to stimulate a jobs-rich recovery had so far proved beyond the reach of the region. “The twin pillars for Caribbean action for jobs and sustainable development could be thus increased consensus on the use and enlargement of regional resources coupled with international support for an easing of the region’s balance of payments constraints and debt burdens,” Pursey added.