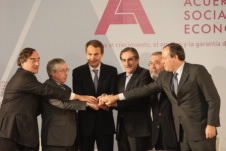 The main reform of the 37-page Social and Economic Pact is a measure to gradually raise the retirement age from 65 to 67 starting in 2013. Incentives will be given to businesses hiring younger workers, as well as long-term unemployed and those aged over 45.

Job-seekers will benefit from the extension of payments to the long-term unemployed, and employers will see sharp cuts in social insurance expenditures, particularly small and medium enterprises. The pact involves job programmes, a boost to research and innovation and reforms in the energy and manufacturing sectors.

There will be generous reductions in social security contributions for employers during the first year for new contracts of minimum six months, a full exemption in payments for companies employing fewer than 250 workers and a 75 per cent reduction for those with over 250 employees.

Spain’s jobless rate in the last quarter of 2010 rose to 4.7 million (more than 20 per cent of the population, compared with 10 per cent in the rest of Europe), with an estimated 1.3 million families with no wage earner.

Particularly badly hit by unemployment are young Spaniards. 1.5 million young people are currently unemployed, out of which 42 per cent are under 25, double the euro zone average. Many of them are highly educated but cannot find jobs and begin to look abroad for work.

Individual unemployment payments are dependent on the amount contributed to Social Security System, and many of the long-term unemployed are no longer eligible to collect any unemployment benefits. Under the social pact, they will receive a monthly grant of just over €400.

Further details of the agreement – guidelines for collective wage bargaining, research and development and the energy market – are currently being discussed. 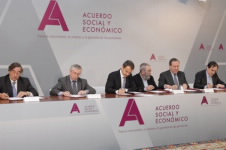 Prime Minister José Luis Rodríguez Zapatero welcomed the pact – which still needs to be ratified by the parliament – and described it as “a sign to the rest of the world that Spain will recover from its economic woes”. "The pact is a message of trust for Spain and the European Union," he said. He commended the unions and employers for their responsible behaviour and common efforts to confront the situation in the country.

Spain is fighting to boost its troubled economy – its collapsed construction sector – to avoid the need for a rescue similar to Ireland and Greece. Economy Minister Elena Salgado described the pact as “excellent news” which should make a European bailout unnecessary for the time being. She warned that unemployment levels will not come down in the immediate future, but improvements will be seen as of the second semester of 2011. “Unemployment figures are not going to be good during the first three months [of 2011] and will not get any better,” she said in a radio interview.