Domestic work provides an essential service to society and the economy, in particular freeing up women’s time to invest in other activities, including paid work. 1/13 female workers in the region Asia and the Pacific region work in domestic work. With demographic shifts, aging populations will drive further demand and job creation in paid domestic work and in particular in care related services.

However, domestic work is also a major segment of the informal economy in many countries around the world. The performance of paid domestic work often remains in the realm of family and personal relations and is not always perceived or acknowledged as being subject to formal public policies on labour and employment. Informal employment in domestic work, along with related uncertainties about the existence of an employment relationship, imply ambiguities as regards to the mutual rights and obligations of worker and employer. This has disadvantages not only for domestic workers but also for the 'employer', with particularly pronounced power imbalance in favour of employers.

The existence of labour law provisions governing domestic work by itself does not end informality of employment due to a number of factors among others the predominance of oral and tacit agreements; the lack of knowledge of applicable laws among employers and workers; inadequate capacity of institutions responsible for enforcement; the fact that home is not considered workplace (therefore it is not open to inspection) and attitudes towards domestic work as ‘female-oriented’, tending it to be under-valued.

To a large extent, around the region and in Indonesia, the conditions of work for most domestic workers cannot be considered ‘decent work’. Decent work deficits, such as long working hours, absence of daily and weekly rest periods, sub-minimum wages, high incidence of delayed payment of wages, lack of access to medical care and social security including maternity benefits for women result from the lack of established, formal employment relationships. Social norms and customs or tacit agreements do not provide adequate protection of domestic workers’ fundamental human rights.

It is undoubtedly that many employers treat their domestic workers well but the absence of legal standards and formal contractual arrangements renders workers dependent on the goodwill of employers. As the subordinate party in the employment relationship, domestic workers are vulnerable to exploitation and abuse. In case of disagreements over wages and other terms of employment, they are in a weak position and lack concrete basis on which to raise and enforce any legal claims.

It is worth noting that formalizing employment relationship between domestic workers and employer through a standard contract assists in achieving clarity and transparency in rights and obligations, in general, will help both parties to avoid misunderstandings, and implement their employment relationship in a harmonious manner. And in case of problems, the employer could also rely on law and formal contractual arrangement for redress and just resolution. Additionally, formalization can contribute to recognition of domestic workers as “real workers” providing an essential service and contribution to society and the economy.

The ILO has been promoting the use of Standard Contracts for Domestic Work around the world, as a concrete and practical means to both providing better working conditions to domestic workers as well as recognizing and raising-awareness of their rights as workers. Standard Contracts have been rolled out in many countries, in order to provide a concrete means of enabling better conditions of work for domestic workers, while providing clear guidance to employers and minimal standards that government can provide to domestic workers.

As an entry point for achieving decent work for domestic workers, Convention No. 189 and Recommendation No. 201 put forward a set of measures to facilitate the formalization of the employment relationship in the context of domestic work. Those measures include labour and social legislation; recognition that domestic work is real work and domestic workers are workers with rights; written employment contract; information and understanding of terms and conditions of employment, records and transparent and easy procedures for registration.

The workshop will focus discussing the use of written employment contracts in facilitating the formalization of the employment relationship in domestic work. Domestic workers should receive full information on their terms and conditions of employment, preferably through a written contract. Contracts lay down the key terms and conditions of employment (see Article 7 of the Convention and Paragraph 6 of the Recommendation). A written contract is a strong manifestation of formality and a proof of existence of an employment relationship. It plays an important role in empowering domestic workers and is a guarantee of decent working conditions if applied. 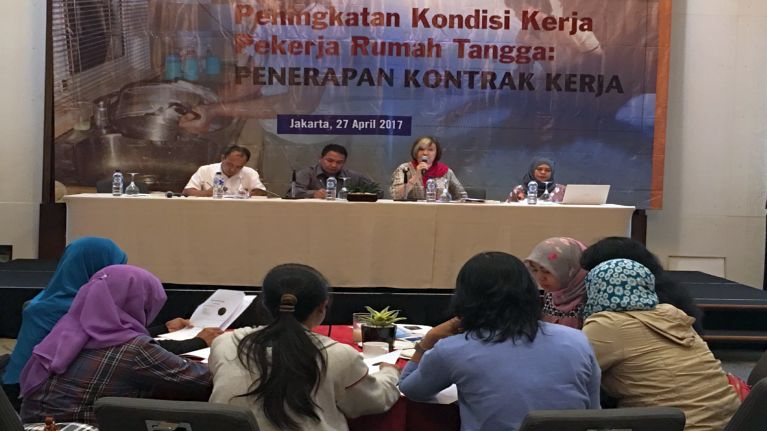 Recognizing the rights of domestic workers through employment contract