Indonesia is now considered as a middle-income country. Therefore, the country has reached a stage in its economic and social development where labour market institutions need to play a more central role in fostering a fair distribution of income. In addition, sound industrial dialogue will be a key ingredient to success for workers, employers and society at large. Overall, promoting decent work will play an important role in strengthening the competitiveness, productivity, job creation in Indonesia.

To further interactively discuss and examine the current labour and employment conditions of Indonesia, the ILO in collaboration with Sonora Radio is planning to organize a special radio broadcast event on employment and labour market conditions in Indonesia.

The broadcast event is an interactive discussion with listeners and audiences asking questions to a panel of experts and other invited guests. The event will be broadcast live for a special 60-minute on-air and 30-minute off-air programme to be aired in Jakarta. 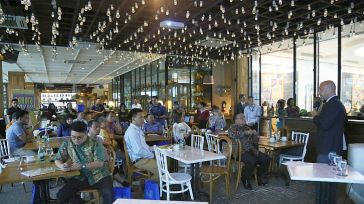 Indonesia should focus on employment-friendly growth