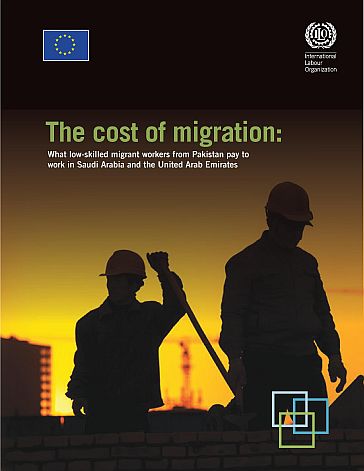 Download:
The central conclusion is that low-skilled Pakistani migrant workers experience an alarmingly high cost of migration: Survey respondents spent on average nearly $3,500 to secure a job in Saudi Arabia or the United Arab Emirates. More than 80 per cent of that total amount covered assistance in obtaining the work visa and was paid to the agent, a relative or a friend who also helped the migrants secure their job.

The study reveals that the information source for an overseas job (through either a formal or informal channel) and workers’ salary before and after migration greatly impact the amount they pay to go abroad for employment. Demographic factors, such as the age of migrants, their marital status, education level and where in Pakistan they reside, also influence the fees charged.

The report suggests several policy recommendations for reducing migration costs and thus the vulnerability of migrants, which would increase the benefits from international labour migration.

The survey used a standard methodology developed by the World Bank-led Global Knowledge Partnership on Migration and Development initiative, making it possible to compare migration costs across corridors.