ISLAMABAD (ILO News): The ILO through its project “More and Better Jobs through Socially Responsible Labour Practices in Pakistan” (MNED project) provided technical support to the Employers Federation of Pakistan (EFP) in conducting a series of seminars on “Highlighting efforts for elimination of child labour in the sports goods industry” in Sialkot and Lahore on 1st October and 2nd October 2020 respectively. The activity provided opportunities for the participants to learn from the best practices in sustaining action to eliminate child labour from their supply chains. The project is supported by the Japanese Government through the Fund for Building Social Safety Nets in Asia and the Pacific.

The seminar was attended by 60 participants in Sialkot and 80 participants in Lahore including the representatives of Sialkot Chamber of Commerce and Industry (SCCI), Lahore Chamber of Commerce and Industry, Sialkot sports goods industry, Pakistan Readymade Garments Manufacturers and Exporters Association (PRGMEA), representatives of textile and garments industry, hosiery manufacturers and leather and tannery industries.

The stakeholders expressed commitment to eliminate child labour from other industrial sectors. A joint statement was passed through a resolution by the stakeholders stating that “The tripartite constituents, Employers, Workers and Government, jointly resolved to replicate the Sialkot experience in elimination of child labour to other Industries in Punjab”

Mr Zaki Ahmed Khan, Vice President EFP, in his welcome address, shared the background of the Sialkot industry and how the industry had successfully addressed the issue of child labour in Sialkot. He shared that the purpose of this seminar was to raise awareness among business and other stakeholders on the gravity of child labour issue and to find the ways and means to combat the issue. He extended thanks the ILO and the Sialkot Chamber for their cooperation with EFP in the MNED project which is aimed at promoting more and better jobs through socially responsible labour practices in sports goods Industry of Sialkot.

Mr Qaisar Iqbal Baryar, President of SCCI congratulated EFP and ILO for organizing the event in Sialkot. He shared that the timing of the event was of importance. Now when the industry was striving to regain its strength, it was important that the efforts made by the sports goods industry in combating child labour was disseminated to other industrial sectors.

Mr Nasir Dogar, CEO, Independent Monitoring Association for Child Labour (IMAC), shared that monitoring is not an only tool in elimination of child labour. The eradication had been made through a road map of socio economic developments for the sports goods sector and the surrounding communities.

Ms Anita Akhtar, Director Anwar Khawaja Industries (AKI) shared an example of good schooling for children for the elimination of child labour. She shared that their sourcing brand “SELECT” and AKI have produced an assistance programme for their workers known as SAHEP (SELECT Anwar Khawaja Industries Health & Education Program). SAHEP’s services include free comprehensive medical assistance and medication for all the members of workers’ families, incentives to keep children at school and direct schooling for children who cannot attend general school.

Mr Ahsan Naeem, CEO Vision technologies shared that the industry had revolved through a shift of working culture. The company in past, built stitching centres in communities and provided working facilities to home based workers; the centralization of workers led to elimination of child labour and monitoring of quality of products as well.

Mr Maj. (R) Khawaja Javaid, Director Forward Group shared that technology had a great impact on the elimination of child labour in the soccer ball industry. Forward Group has adopted the LEAN manufacturing in the production lines. Together with the latest technology the industry has been able to provide jobs with better ergonomic conditions to its workers. It has eliminated the use of child labour in the supply chain and provided better working conditions to its workers.

Dr Nauman Butt, CEO Capital Sports found that the sports goods industry had made a remarkable achievement in terms of elimination of child labour. Such approach would require very less resources to roll over to other industries. The action plan to bring the change was voluntary and indeed benefited the industry. He added that there are number of projects by SCCI that are visible such as infrastructure projects, along those there are efforts made in social development sector that may not be tangible but proved to be promising to sustain the industry.

Mr Zahoor Awan, Secretary General, Pakistan Workers Federation (PWF) joined the event in Lahore and appreciated the efforts to eliminate the child labour from the Sialkot sports goods industry. He appreciated that the efforts had paved the way of decent work for all. It had provided the opportunity to children of Sialkot to get educated through various social development programs.

Mr Zaigham Abbas, District Labour Officer, Lahore also joined the event in Lahore. He expressed concerns about the fewer employment opportunities for school graduates. Skill development programs were very important to fill this gap as technical skills were very important and should be provided to adolescent children along the formal education. He added that stakeholders should continue their efforts in social development.

Mr Saghir Bukhari Senior Program Officer, ILO emphasized the social aspect of elimination of child labour, which is very well explained. He added that SDG target 8.7 calls for an end to child labour in all its forms by 2025. The efforts of the industry would support in achieving this goal. He added that the unavailability of data on child labour was a challenge in Pakistan. With the support of UNICEF and ILO the provincial governments are now working on child labour surveys, which are expected to provide some data soon.

Mr Muzamil Habib Shaikh, Project Coordinator ILO reiterated the objectives of the “More and Better Jobs through Socially Responsible Labour Practices in Pakistan” (MNED project), namely to strengthen socially responsible labour practices and promote decent work in the Sialkot sports goods manufacturing sector. The aim of this event was to highlight good practices and best approaches to serve as an inspiration for other sectors.

EFP is one of the core constituents of ILO and is implementing a number of activities under the phase III of "More and Better Jobs through Socially Responsible Labour Practices in Pakistan”. The Project is funded by Government of Japan through its Fund for Building Social Safety Nets in Asia and the Pacific (SSN Fund). 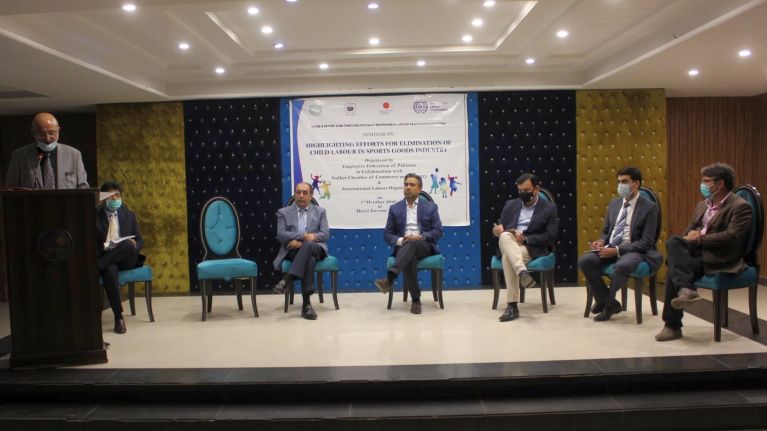