ISLAMABAD (ILO News): ILO Country Office for Pakistan, through its European Union (EU) funded project ‘Sustaining Strengthened National Capacities to Improve International Labour Standards (ILS) Compliance and Reporting in Relevant EU Trading Partners’ arranged a working session for the Labour Force Survey (LFS) Team of the Pakistan Bureau of Statistics (PBS) on 29 March, 2019 at ILO’s office in Pakistan. The session pertained to Priority 3 as set out by the Government, Employers and Workers in the Decent Work Country Programme (DWCP) 2016-2020 and Outcome 2 of the Pakistan One United Nations Programme III (OP III) 2018-2022. FPRW are important pillars of Decent Work and an integral part of Sustainable Development Goals, particularly Goal 8: “Promote sustained, inclusive and sustainable economic growth, full and productive employment and decent work for all” and more specifically referred to its Target 8.7 on the elimination of unacceptable forms of work, as well as other targets such as 8.5 and 8.8. PBS being the principal statistical agency plays key role in monitoring the country’s progress towards SDGs.

The purpose of the event was to improve the understanding of the Fundamental Principles and Rights at Work (FPRW), among the LFS team of the PBS and in turn discuss the possibilities of improving their measurement. FPRW implicate fundamental rights and are thus important to measure. Their contemporary measurement is infrequent and unsystematic e.g. the last national child labour survey in Pakistan occurred in 1996, whereas the forced labour, non-discrimination and equality in employment are rarely comprehensively measured at the occupational or regional levels. Similarly the Freedom of Association and Collective Bargaining have been surveyed only a couple of times. The standalone Child Labour Survey, which was officially launched on 25 March 2019, is costing more than a billion rupees. Owing to these gaps in the measurement of FPRW, the need was felt to engage in a technical discussion around the frequent, systematic and cost efficient measurement of the FPRW. The session was also important for Pakistan from the perspectives of GSP+ and more broadly the SDGs and their reporting. GSP+ sustenance is conditioned to improved compliance and reporting of twenty-seven UN conventions including the eight on FPRW.

Ms Shaista Sohail appreciated the ILO for organizing the very useful session and expressed the desire that similar session would be arranged for the LFS teams, which are working in the field, so that the technical discussions could progressively lead to improved measurement of the FPRW.

Mr Abid Niaz Khan, National Project Coordinator of the DG-Trade project thanked the PBS for finding the session useful in terms of the country’s capacity to report SDG compliance in general and ILS compliance in particular. He also hinted that the project would organize similar sessions with the provincial LFS teams for educating them on the FPRW and discussing the possible indicators for measuring FPRW through the LFS.

Ms Ingrid Christensen, the Country Director for ILO Country Office for Pakistan thanked the PBS for their keen interest in the technical session. She also expressed her office’s resolve to continue providing the technical assistance to PBS towards better understanding the FPRW and their measurement. 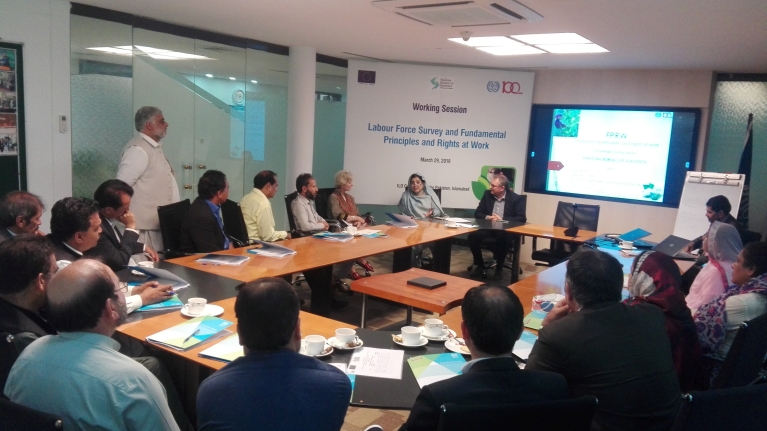