KARACHI (ILO News): International Labour Organization (ILO) in collaboration with Employers’ Federation of Pakistan (EFP) organized a Consultative Meeting on Trade Related Investment Policy Framework (TRIPF)” on Monday, 12th November, 2018 at Hotel Marriot Karachi. The consultative meeting was convened under the EU funded project ‘Sustaining strengthened national capacities to improve ILS compliance and reporting in relevant EU trading partners’. Purpose of the meeting was to promote a social dialogue among the employers from all the provinces of Pakistan to brainstorm labor market implications of the TRIPF and prepare their recommendations, so that the same could be submitted to the Ministry of Commerce for possible inclusion in the TRIPF. Office bearers and representatives of various chambers of commerce and the members of the EFP participated in the consultative meeting.

Mr Tariq Huda, Additional Secretary, Ministry of Commerce presented the salient features of the TRIPF. Explaining the priorities of the new Government, he said that previously the trade policy emphasis used to be on the revenue generating tariff and short-term growth objectives, which were friendlier for investors instead of entrepreneurs. The extra ordinary incentives for selected sectors such as energy, sugar, fertilizer, and attractive returns in real estate and stock exchanges have diverted financial resources away from the manufacturing sector. The Government is now contemplating a trade regime that would be favorable to the manufacturers instead of commercial importers and the trade levies will be so contemplated to favour job creation. Mr Huda further added that investment and FDI particularly in Pakistan is generally channelized into non-manufacturing sectors while even in the manufacturing sector the preference is to cater to domestic demand rather than exports. He added that Pakistan’s current investment climate offers multiple advantages, such as strategic location, natural resources, large domestic market, a strong human resource base, increasing growth, a positive economic outlook, a much improved law and order and security situation, and the game changing China Pakistan Economic Corridor (CPEC) initiative. Mr Huda moreover informed that the government is planning to provide incentives to address the major input costs of raw material energy, labour and capital to export oriented industries, especially to industries in the priority sectors. Pakistan needs to improve its global rankings in order to attract not only FDI but also to encourage domestic investors to set up manufacturing units, especially for exports. He disclosed that by the end of the present tenure of the government in 2023, the country should achieve the targets of global competitiveness index from 115 to 70, doing business index from 147 to 80, and enabling trade index from 122 to 60.

Mr Fasihul Karim Siddiqi, Secretary General of the Employers Federation of Pakistan explained the contribution of EFP towards keeping the employers abreast with trade policy work. He also advised the Government to consolidate all manufacturing and services related incentives in a single package for the export oriented industry. He added that Pakistani employers are ready to comply with all the international labour standards and decent work requirements but the cost of compliance is too high and it affects the competitiveness of the products in the international market, where the global buyers are usually not ready to bear the cost of compliance. He also suggested that special allocation from export development fund be made to the export-oriented enterprises for skill development and skill enhancement of their work force so that they are able to meet the challenges of technology, innovation, and use of artificial intelligence that are formidable tools of enterprise development.


Mr Abid Niaz Khan, National Project Coordinator of the DG-Trade Project explained the increased trade potentials of Pakistan under the GSP+ arrangement and the conditions attached to the sustenance of the GSP+ arrangement including the better enforcement and reporting of the ILO’s fundamental labour conventions. He pinned the hope that labour market governance will proportionally benefit from the increased trade. He added that if the growth was not properly regulated, it would add to labour market informality. He was of the opinion that TRIP framework provided a great opportunity to boost industrialization in the country on one hand and usher in improvement in social compliance in the form of meeting the decent work and GSP+ targets on the other hand. He said that the ILO Pakistan’s Decent Work Country Program (2016-2020) aims to support actions that protect workers from all forms of exploitation.

Earlier, Majyd Aziz, President of Employers Federation of Pakistan, in his welcome address said that EFP has taken the initiative to host this consultative meeting with the support of ILO in order to present the employers point of view and also to assist the Government in fine tuning the TRIP framework. He proposed that the Government should absorb the cost of social protection for export-oriented units. He said that the social protection cost, for Social Security, Employees Old Age Benefit Institution (EOBI), Workers Welfare Fund (WWF) etc. is at least 15 percent of the wage bill. The proposed absorption will have advantages such as lowering the cost of doing business, actual registration of workforce in every unit and ease of compliance of ILO’s fundamental labour conventions-thus an easy access to export markets. He further advocated for Zero taxation on raw material, production machinery and equipment saying that such a front loading of taxes, duties and levies, although mostly adjustable, are drain on capital liquidity of a manufacturing unit.

Ismail Suttar, Chairman EFP Economic Council and Director EFP, proposed that it is imperative that a comprehensive industrial policy is framed before finalizing the TRIPF. He said that if the trade and investment policy is announced before the industrial policy it would create problems in aligning both the policies as the local as well as the foreign investors are looking towards the government to announce some attractive industrial investment policy. He said that both domestic and foreign investors are still apprehensive about frequent policy changes such as in tariff, taxes, and condition of doing business.

More details of the event can be found at: 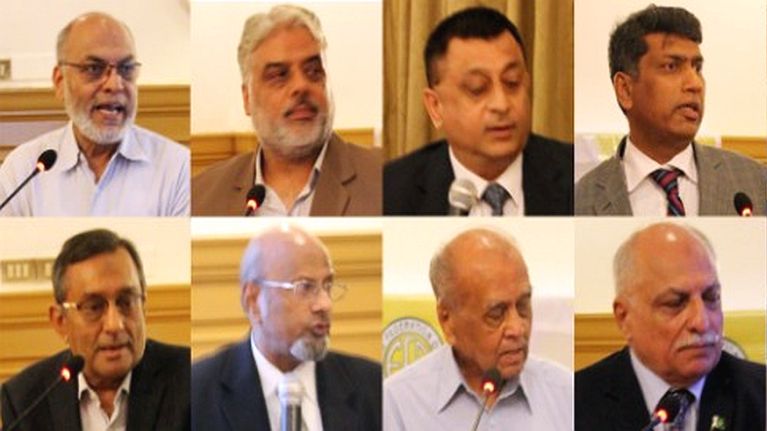