Karachi (ILO News): Speakers at a launch ceremony of a report on the “State of Peasants Rights in Sindh 2015” demanded from the government of Sindh to establish Harri Courts in Sindh, amend the Sindh Tenancy Act, initiate land reforms to give agriculture land to landless peasants and provide education, health and residential facilities to all peasants. The report was launched at Karachi Press Club to mark the 2016 International Day of Peasants. Harri Welfare Association Sindh (HWAS) authored the report which was launched in collaboration with the International Labour Organisation (ILO). The report garners national and international support towards the peasants’ rights by reflecting upon the socio-cultural and political aspects of peasantry in Sindh. It takes stock of various organizations working on peasant rights in Sindh and also analyses the policies and financial allocations concerning the peasants. It also emphasizes the need for pro-peasant policies and actions in line with UN’s draft declaration on peasants’ rights and ILO conventions C-11 and C-29.

According to the report, peasants constitute 70 per cent of world poor and 80 per cent of the world hungry and should be brought under the formal economy and given their human and labour rights everywhere.

While speaking at the occasion, Mr Geoff Brown, a Senior Trade Unionist, stated that “We need to protect the human rights everywhere, therefore, we should support peasants and their struggle anywhere in the world.”

Mr Akram Khaskheli, head of Harri Welfare Association reinforced the need for incorporating the changes and additions proposed by the Harris into the Sindh Tenancy Act of 1950. He also urged the Sindh government to establish Harri courts for protecting the labour and human rights of the Harris as enshrined in Tenancy Act, the Constitution of Pakistan and the other applicable laws. Mr Saleh Biloo, a peasant leader called for an improved availability of support prises to Harris. He demanded that poorest Harris with limited capacities should not be left at the mercy of ruthless markets, especially in the Wheat and Sugarcane sectors. He also demanded education, health and residential facilities for the peasants in Sindh.

Other speakers echoed the need for land and irrigation reforms, arresting the land degradation at the behest of water-logging and salinity and controlling the menace of sea intrusion, which promote extensive unemployment and social unrest in Sindh.

Mr Ashraf Ali, who is Project Manager of UN- FAO said there was need to create awareness among Haris and land owners about Sindh Tenancy Act 1950 in order to minimize the mistrust between peasants and landlords. Land tenure systems are different across Sindh, and therefore require sound analysis. Mr. Ali expressed hope that awareness about the Sindh Industrial Relations Act (SIRA) will be expanded by the Department of Labour in the other districts of Sindh, similar to what has been done in Dadu and Mirpurkhas districts under the auspices of a One UN Joint Project titled ‘Livelihood restoration, protection and sustainable empowerment of the vulnerable peasant communities in the Sindh province’. He emphasized that SIRA awareness can help the peasants purposefully organize and struggle for changing the unjust and inhuman labour conditions. He also requested the enforcers to enforce SIRA in its letter and spirit

Mr Zaheer Arif Project Officer of the ILO re-affirmed that the principle of freedom of association is at the core of the ILO’s work; the right to organize and form employers’ and workers’ organizations is the prerequisite for sound collective bargaining and social dialogue. Article 17-A of the Constitution of Pakistan also extends this right to every citizen, but the social scenario is regrettably controvert, which need to be reverted in the interest of the labourers particularly the agriculture labourers who are mostly women. He also mentioned the One-UN Project’s efforts in simultaneously organizing the agriculture workers and employers and letting them begin the social dialogue on the agriculture establishments.

Mr Karamat Ali emphasized the need for true implementation of ILO Conventions, particularly the C-11 and C-29 concerning the rights to organize for agriculture workers and elimination of forced labour respectfully. He urged the workers to intensify their efforts and strongly demand their rights in an environment that is quite conducive because of the helpful influences. 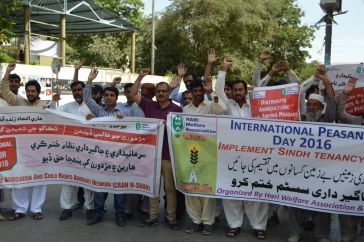