MIRPURKHAS (ILO News): Encouraged by their own entrepreneurial abilities and business potential, the women from landless peasant families of the village Daulat Leghari, District Mirpurkhas, in Sindh have setup “First Women-owned Bakery” while a group of unemployed youth have established a rural Computer Literacy Centre for providing training to hundreds of youth. These enterprises have been setup under a One-UN project “Livelihood Restoration, Protection and Sustainable Empowerment of Vulnerable Peasant Communities in Sindh Province (LRP). The inauguration of the two rural enterprises was performed by Mr Shafiq Ahmad Mahesar, Commissioner of Mirpurkhas Division on December 18, 2015.

The Commissioner, Mirpurkhas Division encouraged the rural entrepreneurs to excel further considering their successes and inspire others in the area for self-employment. He emphasized the need for offering the IT skill trainings for the girls also, so that they could start earning incomes by working from home. He offered the support and space for IT skills trainings for girls and also committed support to ILO’s future initiative of providing carpet weaving skills to unemployed youth (boys & girls). The Divisional Administration will provide full support to setting up of carpet weaving training centres in Mirpurkhas Division.

While speaking over the inaugural ceremony, Ms Perveen Sheikh, President of Entrepreneurship & Community Development Institute (ECDI) explained that one hundred (100) unemployed youth and landless peasants were provided elementary training in various vocational skills followed by advance training on enterprise development given to twenty five boys and twenty five girls in Information Technology and Food Processing skills respectively. The unemployed boys have setup Rural IT Literacy Centre while the girls have established the ‘First Women-owned Bakery’. The women who had also received toolkits as part of their elementary training, put their skills to action and started earning for themselves. They were preparing bakery items and were selling their produce in local schools, houses and the rural markets within and around their village. Encouraged by their own abilities and potentials, the enterprising women decided to setup the First women-owned Bakery. They have materialized their dream of setting up the bakery, which they hope will soon grow and become competitive with other renowned bakeries in the urban locations.

The rural IT literacy Centre is yet another example of entrepreneurship demonstrated by the rural youth. A group of 25 unemployed youth who had secondary or higher secondary education and who couldn’t continue their education were identified. Most of them had indulged into unhealthy activities and their unemployment was a great source of frustration for them. When they learned about the vocational training programme being offered in their village, they enrolled for the elementary IT course and after receiving the training and toolkits, they setup a basic IT centre and some of them also managed to find jobs and paid work. The entrepreneurial group of youth has received support from the ILO and they have setup an IT literacy centre from where they are training hundreds of youth in market-oriented IT skills.

The National Project Coordinator for International Labour Organization Mr Abid Niaz Khan informed about the various community/ rural development initiatives taken under the One-UN project. He said that “Off-farm skills leading to decent employment is complementing the on-farm livelihoods in Sindh, thus making the livelihoods more resilient to the challenges faced due to recurring floods and also the threats induced by climate change. Skills for Decent Employment, Rural Development and Enterprise Development are ILO’s priorities, under which the landless peasants and the unemployed youth are being provided off-farm skills.

These interventions are part of a One-UN Project “Livelihood Restoration, Protection and Sustainable Empowerment of Vulnerable Peasant Communities in Sindh Province (LRP)” jointly implemented by three UN Agencies including ILO, FAO and UN-Women. The Project is funded by the UN Trust Fund for Human Security (UNTFHS) and the project areas include two Districts of Sindh Province including Dadu and Mirpurkhas. The component on non-farm livelihoods, skills development, enterprise promotion and access to microfinance is entrusted to ILO as part of larger joint project. 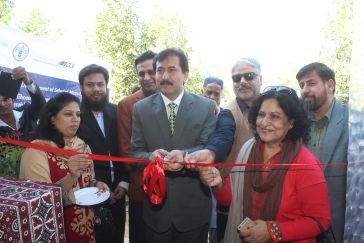