The Vision Zero Fund (VZF) held a successful global stakeholder event at the ILO in Geneva on Friday 9 November. Opened by ILO Deputy Director-General for Policy, Deborah Greenfield, and attended by members of the VZF Steering Committee, VZF teams in the field, representatives from the donor community and private sector, social partners, and ILO colleagues, it was an opportunity for the VZF to showcase achievements, highlight challenges, and detail future plans.

In her opening remarks, Deborah Greenfield, Deputy Director-General for Policy, underlined the timeliness and importance of the VZF initiative and the need for collective action to reduce workplace hazards in global supply chains. Deputy Director-General Greenfield noted that the ILO’s Director-General was present at the launch of the Vision Zero Fund, during the G7 Employment and Development Ministers’ Meeting in Berlin in 2015. At this meeting, the Director-General expressed the ILO’s appreciation for the confidence and trust that had been placed in it to undertake the administration and implementation of the Fund. Placing the Fund in the ILO was strategic for a number of reasons, she said. Projects supported by the Fund draw on the ILO’s significant expertise as a global leader in occupational safety and health (OSH) and employment injury insurance systems and the experience it has gained through its programmes working in global supply chains. The Fund is supported by the important work of the ILO Flagship Programmes, in particular the OSH- Global Action for Prevention Programme and the Better Work Programme. She also noted that the work of the VZF contributes directly to the ILO’s five year Programme of Action on Decent Work in Global Supply Chains (GSCs), which was adopted in 2016.

In her remarks, Nancy Leppink, Chief of the ILO’s Labour Administration and Occupational Safety and Health Branch, provided an overview of the ILO’s Flagship Programme on OSH, highlighting its focus on specific OSH challenges. These are (i) small and medium enterprises (SMEs); (ii) the hazardous agriculture and construction sectors; (iii) workers with increased vulnerability to OSH risks, such as young workers, women and migrant workers; and (iv) global supply chains, which account for over 70% of all global trade. The VZF, with its focus on reducing accidents, injuries and diseases in global supply chains, is therefore an integral part of the Flagship Programme. The VZF constitutes a unique vehicle for GSC-related OSH work within the Flagship, while further refining and implementing tools and approaches developed under the global programme.

Ockert Dupper, VZF Global Programme Manager, highlighted some of the achievements of the VZF over the past two-and-a-half years since the VZF was established. These include a growing donor base, a fourfold increase in contributions, the commencement of operations in Ethiopia, Madagascar, Lao PDR and Myanmar, the adoption and refinement of a unique set of tools to assess of the main drivers and constraints for safety and health improvement in supply chains, and the development and publication of a number of key knowledge products, including reports, briefs and toolkits. Future plans include the launch of country projects in Colombia, Mexico, and Tunisia, the further expansion of VZF donors, in particular private sector donors, and convening global expert and stakeholder meetings to promote the learnings of the VZF and further mobilize the untapped potential of GSCs to improve OSH outcomes in producing countries.

Providing an update on the developments in VZF country operations was a particular focus of the meeting. The VZF country project managers from Myanmar (Mariana Infante) and Lao PDR (Kristina Kurths) presented achievements, challenges and future plans of their respective country projects. In Myanmar, significant progress has already been made in the efforts to improve OSH in the ginger and garment supply chains, while in Lao implementation of activities in the garment and coffee value chains are about to commence following the comprehensive mapping of the two supply chains. Both speakers highlighted one of the unique aspects of the VZF approach, namely the active involvement of stakeholders in the selection of supply chains, the design of interventions, and in the implementation of activities. This facilitates local ownership and collective action, and ensures the sustainability of interventions.

During a lively period of open discussion, participants’ expressed support for the work of the VZF, and offered valuable suggestions on how the Fund’s efforts could be further strengthened to reduce accidents, injuries and diseases in global supply chains, and on additional steps that could be taken to develop the VZF into an initiative that not only improves the safety and health of workers, but also ensures that the benefits of globalization are more equally distributed. In her closing remarks. Sabine Baun, Director of International Employment and Social Policy in the German Federal Ministry of Labour and Social Affairs, and member of the VZF Steering Committee, announced that the German government had approved a further Euro 3,0 million contribution to the VZF. She strongly encouraged other G7 and G20 countries as well as the private sector to support the Fund in order to help it grow into a truly global initiative. 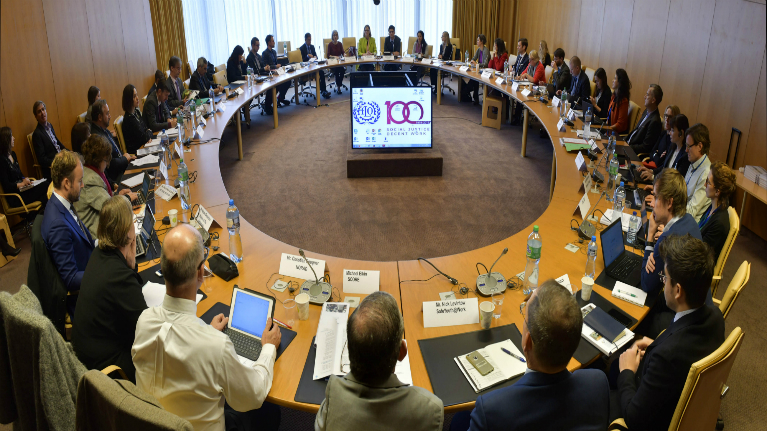