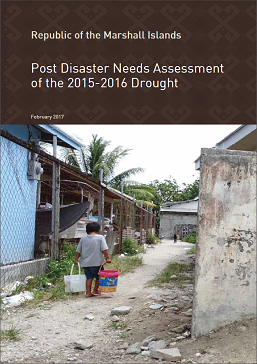 Download:
The Republic of the Marshall Islands (RMI) is extremely vulnerable to climate change and natural hazards. The country is experiencing damaging effects from climate change and seeing more frequent and intense events, such as drought, floods and swells, and tropical cyclones and storms. The recent drought of 2015–2016 resulted in the national government having to declare a state of disaster with an estimated 53,158 persons or 7,738 households across the RMI affected by the severe drought conditions.

The PDNA shows that the total economic losses caused by the drought have an estimated value of USD 4.9 million, with agriculture being the single most affected individual sector. Based on the assessment on employment and livelihoods, supported by the ILO, it is estimated that, during FY 2016, approximately 7,084 work days (or its equivalent of 27 full-time jobs) and USD 71,120 of personal income were lost as a net result of a drought-induced shift in production. The quality of life in the atoll country declined significantly as a direct result of the drought conditions.