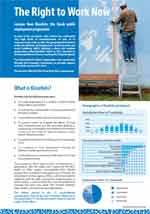 Télécharger:
Due to the ongoing economic and debt crisis in Greece, Greek society continues to confront very high levels of unemployment. As part of its response to the crisis, in 2011 the government of Greece, under the Ministry of Employment, Social Security and Social Solidarity (MOL) initiated a direct job creation programme called Kinofelis, which in 2017 operated in all municipalities in Greece, reaching 45,225 participants.

The International Labour Organisation was contracted, through the European Commission, to provide support to Kinofelis during 2016-2017.