Domestic workers are those workers who perform work in or for a private household or households. They provide direct and indirect care services, and as such are key members of the care economy. Their work may include tasks such as cleaning the house, cooking, washing and ironing clothes, taking care of children, or elderly or sick members of a family, gardening, guarding the house, driving for the family, and even taking care of household pets. A domestic worker may work on full-time or part-time basis; may be employed by a single household or through or by a service provider; may be residing in the household of the employer (live-in worker) or may be living in his or her own residence (live-out). A domestic worker may be working in a country of which she/he is not a national, thus referred to as a migrant domestic worker.

Although they provide essential services, domestic workers rarely have access to rights and protection. Around 81 per cent are in informal employment – that’s twice the share of informal employment among other employees. They also face some of the most strenuous working conditions. They earn 56 per cent of average monthly wages of other employees, and are more likely than other workers to work either very long or very short hours They are also vulnerable to violence and harassment, and restrictions on freedom of movement. Informal domestic workers are particularly vulnerable. Informality in domestic work can partly be attributed to gaps in national labour and social security legislation, and partly to gaps in implementation.

For more information, see the most recent ILO report on domestic work 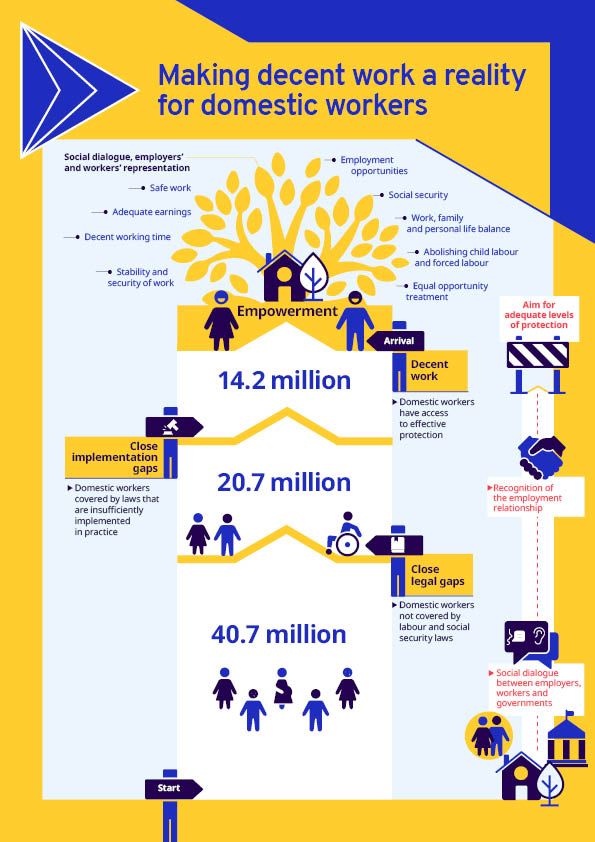