On 14 April 2022, the Republic of San Marino deposited the instrument of ratification of the Violence and Harassment Convention, 2019 (No. 190) with the Director-General of the ILO.

By submitting the instrument of ratification, San Marino becomes the 12th country in the world, and the 4th country in Europe, to ratify Convention No. 190.

Convention No. 190 is a landmark instrument. It is the first international labour standard to address violence and harassment in the world of work. Together with Recommendation No. 206, it provides a common framework for action and a unique opportunity to shape a future of work based on dignity and respect. These instruments will be key to achieve the objectives set by the ILO Centenary Declaration for the Future of Work, adopted in 2019, that clearly commits to a world of work free from violence and harassment, and more recently, and by the ILO’s Global call to action for a human-centred recovery from the COVID-19 crisis that is inclusive, sustainable and resilient.

The Convention affirms that everyone has the right to a world of work free from violence and harassment. It also provides for the first internationally agreed definition of violence and harassment in the world of work, including of gender-based violence, understood as “a range of unacceptable behaviours and practices” that “aim at, result in, or are likely to result in physical, psychological, sexual or economic harm”. This definition protects everyone in the world of work, including interns or apprentices, and persons who exercise the authority, duties or responsibilities of an employer, and covers the public and private sectors, the formal and informal economies, as well as urban and rural areas.

The Convention requires ratifying Member States to adopt, in consultation with representative employers’ and workers’ organizations, an inclusive, integrated and gender-responsive approach to preventing and eliminating violence and harassment, through prevention, protection and enforcement measures and remedies, as well as guidance, training and awareness-raising. It also recognizes the different and complementary roles and functions of governments, employers and workers and their respective organizations, taking into account the varying nature and extent of their responsibilities. The Convention and its accompanying Recommendation are tangible evidence of the enduring value and strength of social dialogue and tripartism, which have shaped them and will be essential in implementing them at national level.

In depositing the official instrument of ratification at the ceremony held at the ILO in Geneva, Mr Teodoro Lonfernini, Minister of Labour, Economic Planning, Sport, Information and Relations with the State Public Utilities Corporation, underlined the need to maintain the attention on the issue of violence and harassment at work and stated that “the Government and the Trade Unions and Employers' Associations are working, with an inclusive approach, recognizing the complementary role and functions of all the actors, for the preparation of a "Multiannual National Plan on the elimination of violence, harassment and gender discrimination in the world of work" in accordance with the provisions of the Convention.”

Receiving the instrument of ratification of Convention No. 190, the Director-General, Mr Guy Ryder, stated that “since the Convention was adopted in 2019, the COVID-19 pandemic, and its dramatic human and economic consequences, have highlighted the need to further strengthen action against them, with many occurrences of work-related violence and harassment being reported in the world since the outbreak began, particularly against women and vulnerable groups of persons. I strongly believe that this Convention has a crucial role to play in this regard”. Mr Ryder added that “through this ratification, San Marino not only undertakes formally to implement and enforce the provisions of Convention No. 190, but it also strongly reaffirms its commitment to the protection and respect of human rights, decent work and social justice for all”.

To date, San Marino has ratified 26 Conventions (of which 24 are in force). For further information, see NORMLEX. 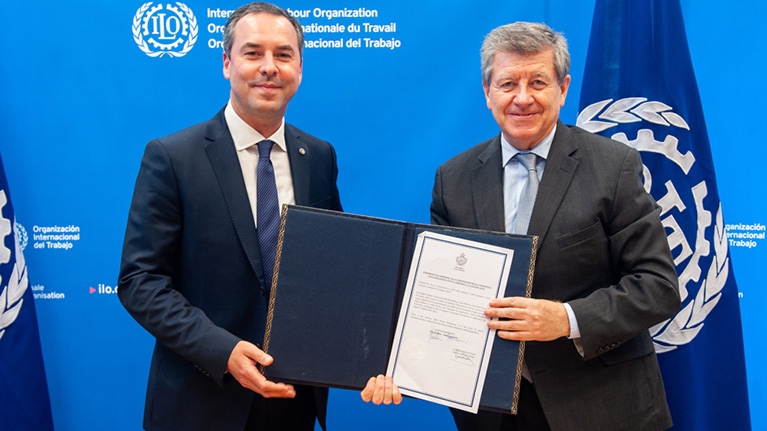