On July 1st, 2021, Mauritius became the seventh country in the world, and the third African country, to ratify the ILO’s Violence and Harassment Convention, 2019 (No. 190).

In depositing the official instrument of ratification, Minister SOODESH S. CALLICHURN stated: “Mauritius is proud to be one among the few countries in the world and the first one in the Indian Ocean region to ratify the present instrument allowing a world of work free from violence and harassment. This process started some 18 years back, in 2003, when we participated in an ILO meeting of experts on the drafting of a “code of practice on violence and stress in service sectors”.

Minister added: “This instrument comes at an opportune moment since we are all going through testing times due to Covid-19 pandemic. Millions of workers have been laid-off and the working ecosystem is adjusting itself in the wake of mutations arising. This ratification exercise is, therefore, a huge leap forward in terms of guaranteeing a safe environment for workers who are our main resource and who contribute immensely to the social and economic development of our country”.

ILO Director-General Guy Ryder, thanked the representative of the Government of Mauritius for his country’s ratification: “I am extremely pleased to receive this instrument of ratification, which bears witness to the political will of the Government of Mauritius and its commitment and support to combatting violence and harassment in all its forms in the world of work. This ratification, being the fourth registered this year, shows the momentum gained by the Convention and comes at a crucial time as the Convention entered into force on 25 June 2021.”

He added that “in times of crises, such as the past 18 months where the world has been fighting to overcome and recover from a global pandemic, the risk of violence and harassment escalates. Many forms of work-related violence and harassment have been reported. Convention No. 190 will play a crucial role in shaping a human-centered response and recovery, tackling injustice and supporting the building of a better normal, free from violence and harassment, including gender-based violence.” He also noted that “the view of the social partners was thoroughly sought before ratification. This augurs well for the implementation of the Convention and Recommendation at national level.” 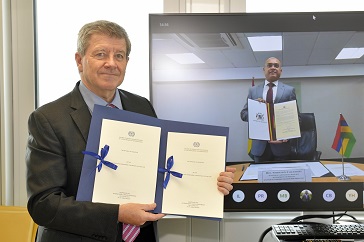